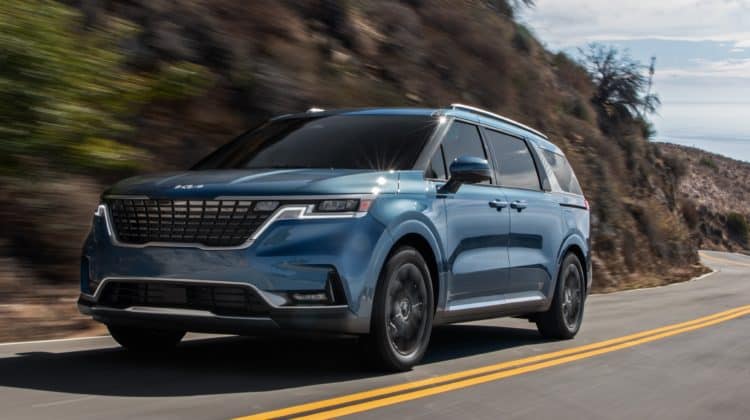 The way each of the four minivan models currently on sale drives differs because of the powertrains they use. You have two hybrids and two strictly internal combustion models. To no one’s surprise, the Toyota Sienna is the least powerful and the slowest of the bunch, putting it in the same ballpark as your average crossover. The Sienna also creates more engine noise when you call for full power during passing or climbing steep inclines. Hills are also the Sienna’s biggest enemies because they will prevent it from reaching its EPA-estimated fuel economy figures. Blame the vehicle’s heavy near 5,000-pound curb weight because it’s the reason why the Sienna’s powertrain starts to work hard during demanding driving conditions.

Chrysler’s Pacifica Hybrid may be the heaviest here but it’s no slug. With 260 hp on tap from its plug-in hybrid powertrain, the Pacifica doesn’t struggle when you ask for more power. You also don’t want much energy when braking thanks to the larger battery compared to the Sienna. Unfortunately, the weight does take a toll on braking because the Pacifica takes over 130 feet to stop from 60 mph. Comfort levels, however, are top-notch in the Pacifica thanks to its suspension tuning, which has been revised to accommodate the Hybrid’s added curb weight. It’s also the quietest of the bunch at 70 dB at 50 mph. Unfortunately, you can’t control the hybrid system’s operation. You need to deplete the battery or put your foot all the way down on the accelerator to go into hybrid mode. There is a B mode for added regenerative braking but that’s it. There isn’t even a Sport mode or many ways to help you see how you’re utilizing the powertrain.

If you’re looking for a minivan with good handling, the Honda Odyssey ekes out a slight win over the Toyota Sienna. With a 7.0-second run to 60 mph, it’s also one of the quickest minivans on sale today whiles its 130-foot stopping distance from 60 mph is fairly respectable for the size of the vehicle. Credit the snappy 10-speed automatic for the Odyssey’s quick acceleration. Of all Honda vehicles using the company’s latest 3.5-liter V6, the Odyssey has the least powerful version. The Odyssey is also not available with AWD, limiting its appeal. However, when it comes to handling, the Odyssey rises to the top. Where it could use some improvements is steering because it’s a little lifeless and its fuel economy is nowhere close to the electrified powertrains found in the Sienna and Pacifica Hybrid.

The Kia Carnival is the second quickest minivan of the four, hitting 60 mph in 7.2 seconds. Its stopping distance of 124 feet, however, is on the shorter end while its 70-dB cabin noise score is right on par with the rest of the segment. The Carnival’s driving experience is very car-like thanks to its lower center of gravity than your typical crossover. Don’t be fooled by the Kia’s rugged looks because the way it goes down the road feels is definitely not similar to its crossover sibling, the Telluride.

In short, all of the entries in the minivan segment are great to drive. It’s just a matter of finding one that fits your priorities best. You now have ultra-efficient choices and extremely luxurious ones, too, meaning there’s something for everyone.