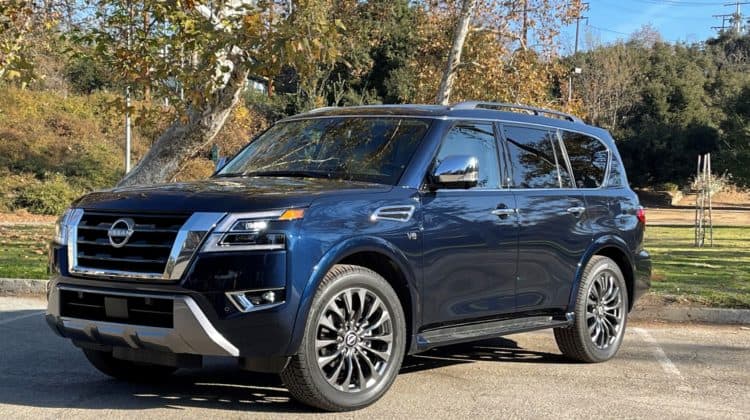 Nissan first unveiled the current generation Armada four years ago. Based on the existing global market Patrol, this rig isn’t exactly the newest. The Armada has its merits, though; it’s powerful, comfortable, quiet, and packed with a long list of standard equipment. For 2021, Nissan made significant changes to the Armada inside and out. Will that be enough to get consumers to consider one?

The most noticeable update on the 2021 Armada is the face with its slick new C-shaped LED headlights. Nissan’s V-motion grille and a reworked lower front fascia with small LED fog lights on certain models create a more cohesive look. Not much else has changed on the outside; the new Nissan logo adorns the front and rear, there’s a chrome strip connecting both tail lights, and the model name is now emblazoned across the tailgate. Otherwise, the Armada is still a big, boxy body-on-frame SUV with an imposing presence.

Get inside and you’ll find a revised center stack with a massive 12.3-inch touchscreen. The button layout is similar to the ones found in the Altima and Rogue, and there’s a cubby underneath the climate controls housing the optional wireless charging pad. All models also come standard with a 7.0-inch instrument cluster display while Platinum variants get snazzy leather upholstery with diamond-quilted inserts.

At least on the Platinum trim, the 2021 Nissan Armada’s interior wouldn’t be out of place in a luxury-badged SUV. The quilted leather adds to the expensive look and ambiance once you enter the cabin. Controls have a nice level of tactility and nearly every touchpoint is padded or made of soft plastic. All the harder bits are far away from the areas you touch. Sound insulation is excellent, too. Road, tire, wind, and powertrain noises are managed well, giving you a quiet cabin.

The Armada finally gets Nissan’s latest infotainment system and boy does it do a lot in improving the overall experience. The 12.3-inch touchscreen is responsive, intuitively laid out and you still get traditional volume and tuning knobs. Graphics are crisp and the main menu is easily customizable. However, you can’t switch out of the split-screen layout regardless of whether you’re using the native interface, Apple CarPlay, or Android Auto. You can control the display via a set of buttons and a knob behind the shifter but we found interacting with the display remains the most intuitive way to use the interface. Certain models also get a 13-speaker Bose audio system, which does a great job enveloping the cabin in your tunes.

The first two rows of seats are the best in the house, especially the second-row captain’s chairs. These seats are like nicely upholstered recliners with great support for your back, thighs, and bum. The third row, while easy to access via the tumbling second-row seats, is good only for short drives or children. Blame the raised floor and limited legroom for the lack of space.

As with most three-row SUVs, cargo capacity is limited when all seats are up. Folding the third-row expands overall volume significantly. Dropping the second and third rows turns the Armada into a box on wheels that can carry a lot of gear. However, the lack of a sliding second-row doesn’t allow for a flat load floor to the back of the front seats.

The first thing you’ll notice behind the wheel of the 2021 Nissan Armada is that this rig feels massive. It’s as big as it looks and stays that way regardless of whether you’re driving on an open freeway or tight city streets. Steering is slow and heavy at city speeds and lightens up a touch once you’re on the highway. Despite having good body control, the Armada’s size becomes most apparent when the road starts twisting where its top-heavy nature emerges. Ride comfort is outstanding even with the Platinum trim’s 22-inch alloy wheels. Speed bumps, potholes, ruts, and cracks nearly disappear under the Armada, preventing harsh impacts from being felt in the cabin. Although the brakes are strong and capable of executing panic stops confidently, you get plenty of nose dive, especially during emergency stops.

Nissan’s updated 5.6-liter V-8 is a smooth operator. Despite having to move a 6,037-pound SUV, the engine doesn’t struggle and provides linear power delivery. Like the Titan, the Armada now has 400 hp and 413 lb-ft of torque, an increase of 10 hp and 19 lb-ft over the pre-refresh model on premium fuel. Speaking of gas, the Armada is still not efficient. With an EPA rating of 14/19/16 mpg city/highway/combined for RWD models and 13/18/15 mpg with 4WD, this SUV chugs fuel at an alarming rate. The seven-speed automatic transmission remains the weakest point because it’s slow to respond when you put your foot down on the accelerator. Nissan’s new nine-speed automatic, which is in the Titan and Frontier, could make the Armada smoother and more responsive.

Nissan’s Safety Shield 360 suite of driver assistance features are standard on all Armada models. Each part of the system worked well and never became intrusive thanks to gentle reminders via subtle beeps or steering wheel vibrations in the case of lane departure warning. Lane-keeping assist applies the brakes slightly to recenter you instead of steering you back in. Adaptive cruise control’s distancing veers on the conservative side to provide more room for emergency maneuvers.

This refresh breathes new life into Nissan’s largest SUV, bringing it to the modern age while still retaining all the virtues that originally made it a good value. Nissan addressed most major quibbles, especially with regards to the multimedia system. As for the rest of the car, age doesn’t hinder the Armada; the engine is solid and the interior is nicely appointed. If there were things left to change it would be to swap out the old seven-speed auto for the quicker, more responsive nine-speed in the Titan and Frontier. In short, these updates make the Armada a stronger player in the full-size SUV segment. At $48,500 for the base S trim before the $1,395 destination fee, the Armada is still a good value. Adding 4WD adds $3,000 to the base price. A loaded example like our Platinum 4WD test vehicle stickers for $67,900. With destination, that total to $69,295, putting the Armada right in the luxury territory. However, you still get plenty of equipment and the interior is befitting the price tag, especially with all the significant changes it received.