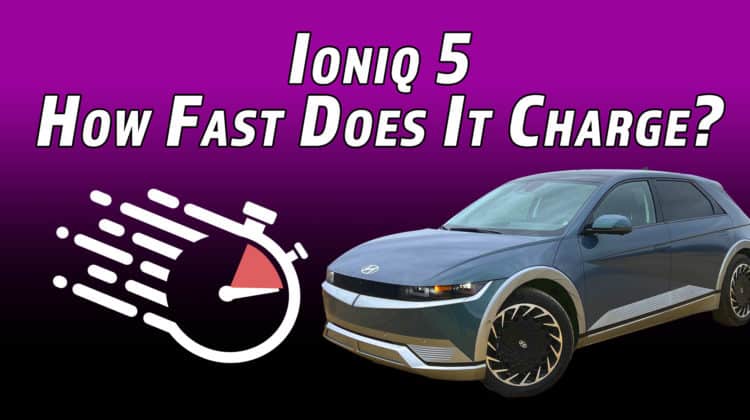 With a peak charge rate of 236 kW and a mind blowing 196 kW average charge rate from 10% SOC to 80% SOC, the Ioniq 5 is now the fastest charging EV in the world. According to Hyundai you can go form 10-80% in just 18 minutes and 10% to completely full in just over 40 minutes. Is it really possible? I put it to the test and crunched the numbers.

Contrary to earlier reporting, Hyundai will be offering the Ioniq 5 in the USA with two different packs. The standard range model gets a 58 kWh pack while the “extended range” model I tested got the larger 77.4 kWh pack that most models will receive. While I plan on repeating this test with the smaller pack, my only experience so far has been with the larger one. Depending on the market, some Ioniq 5s may also be equipped with a 77.2 kWh mid-size pack.

Right now all indications point to the batteries being made by SK Innovation, a long time Hyundai partner, while the sub assemblies are made by Hyundai Mobis.

Hyundai’s transition from a 400V architecture in their previous EVs to the 800 volt architecture found in all E-GMP platform cars (including the Kia EV6 and Genesis GV60 for now) is one of the main reasons for the Ioniq’s high charge rates. By doubling the DC fast charge voltage, current drops by 50% enabling the use of smaller conductors and reducing the need for conductor cooling (Note however that basically all 150kW and faster CCS stations use liquid cooled cables). Aside from Tesla, most EV makers have shied away from charging any faster than around 190-200kW on a 400V system due to the high current requirements, the 800V transition should make things easier.

The first thing I had to do was get the pack down to 9%. After a day’s driving I did this by selecting the longest route possible to the charging station, which for this test was an Electrify America station in El Cajon, CA. The outside temperatures were around 60 degrees and no navigation destination was set. I pulled into the EA station just as the indicator dropped to 9%. 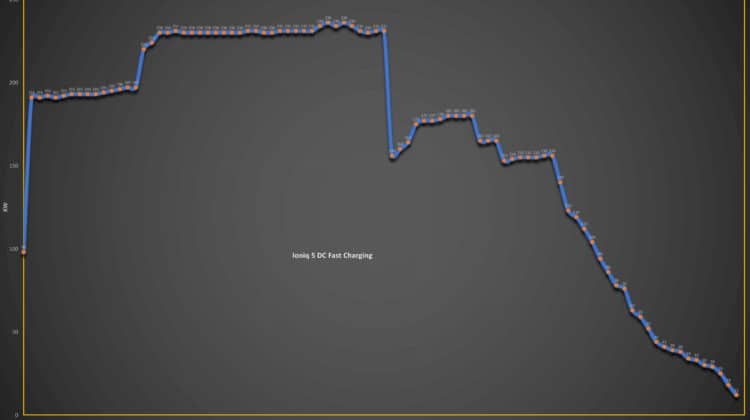 Thankfully Hyundai has decided to support Plug And Charge on select CCS networks, EA being one of them, so all I had to do was plug the Ioniq in and charging started. After charging negotiations started the charge rate shot from 98 kW to 191 kW which is impressive for a battery that wasn’t to my knowledge preconditioned in any way. As with a few other modern EVs, Hyundai’s charge rates happen in “pleteaus.” The first was 10-24% where charge rates hung out between 191 and 197 kW, then things jumped up to 230 kW and a little higher between 25 and 55% SOC with the peak rate recoded of 236 kW at 50 % SOC. After that charge rates took a significant drop, reasons for this remain unexplained, to 156kW before recovering and stabilizing around 180 kW. Some have assumed this was cooling related, but I did not observe any change in the Ioniq’s cooling system during this time. Since Hyundai does not provide detailed battery pack or cooling information in the infotainment system we may never know. I suspect however this is more an intended design to the charge curve since systems like this should respond to pack temperature in a smoother fashion. Who knows.

The most interesting thing about the charge curve to me is how rapidly the pack charged from 80% to 100%. Unlike the Mach E which has a severe reduction in charge rate after 80%, the Ioniq 5 was still cooking along at 112 kW as we crossed over 80%. Between 81 and 99 % SOC the Hyundai averaged 50.2 kW which is significantly higher than most new EVs.

2023 Honda HR-V First Drive: I recently had the chance to spend some time … END_OF_DOCUMENT_TOKEN_TO_BE_REPLACED