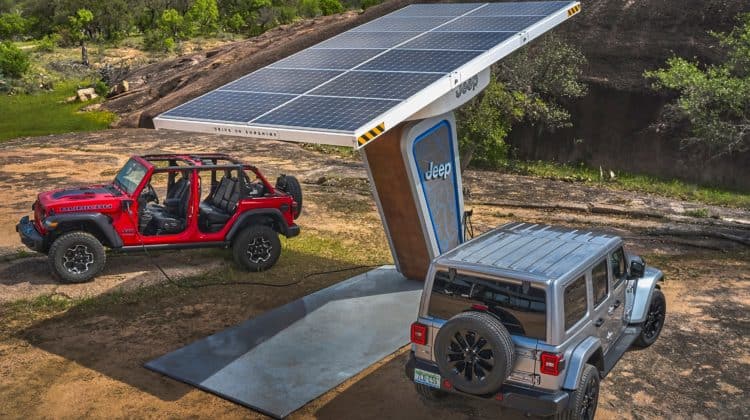 Jeep’s Wrangler is an American icon that almost wasn’t. As Jeep starts a transformation into a “greener” brand, let’s look back at Jeep’s seemingly unlikely second-best-selling model, and why the Wrangler is the reason the Ford Bronco is returning.

The start of the Wrangler

Back in 1986, AMC launched the first SUV called the Jeep Wrangler. If it were not for a cash infusion from Renault that resulted in a 50% share of AMC, the Wrangler would never have seen the light of day. It wasn’t a huge seller back then, they sold just 30,000 in the first model year (1987). The plucky little off-roader had big shoes to fill, it took over from the CJ line of Jeeps that dated back to 1944, but the dimensions were right for the time. It was 152 inches long, had a wheelbase like a Fiat 500, and was just 5.5 feet wide. Fun fact: the half-French Wrangler used a few transmissions, a Toyota/Aisin manual, a Peugeot manual, or a Chrysler 3-speed automatic.

Over the years the Wrangler was constantly threatened with cancellation as Jeep bounced from owner to owner. Since 1945, Jeep has been owned by Willys-Overland, Willys Motors, Kaiser-Jeep, American Motors, American Motors/Renault, Chrysler Corp, DaimlerChrysler, Cerberus (Chrysler LLC), Fiat Chrysler, and now Stellantis which is a merger between Peugeot Citroën and FCA bringing the French connection for the Wrangler full circle.

Tides began to turn in 2007 when Jeep did the unthinkable: they made a four-door Wrangler. A four-door was controversial from the start because it was enormous by Wrangler standards. The body was nearly 3 feet longer than the original Wrangler. Ouch. The wheelbase was longer than a Highlander or Pilot’s wheelbase and the body was nearly a foot wider than that 1987 Wrangler that caused such consternation. But despite the dimensions, it turns out that a bigger Wrangler was exactly what the public wanted.

The Big Gulp model turned the Wrangler from a sales curiosity, into a sales success. 2007 was the second-best sales year for the Wrangler and despite the economy and energy crisis, the trajectory launched the Wrangler to over 200,000 in yearly sales. Today the Wrangler sells about as well as a Toyota Highlander or Jeep Grand Cherokee, and is the best-selling body-on-frame SUV in North America. But that sales success is a bit of a mixed bag. Off-road wise the Wrangler is still insanely capable… If it fits on the trail. The wheelbase is now just 1 inch short of the whale-like 3-row Dodge Durango a whopping 10 inches longer than a 2000 Grand Cherokee. Meanwhile the body has grown from a decidedly sub-compact size in 1986 to the same length as a 3-row Kia Sorento.

Volume tends to fix everything

On the other hand, if it weren’t for the sales volume, the Wrangler would be dead. It is expensive to design and builds a vehicle like the Wrangler because so much of the vehicle has to be unique. Creating a vehicle that can meet crash standards, fuel efficiency standards, etc., and still be a convertible with removable doors and windows is a daunting task. If the Wrangler 2-door were alone in the lineup, it simply wouldn’t exist. As of 2020, the 2-door model represents just under 10% of total sales. If it were not for the 4-door, the Jeep lineup wouldn’t include features like a manual transmission, 5 engine choices, or the new plug-in hybrid model, it would simply be too expensive to exist.

The four-door Jeep Wrangler Unlimited is the reason why Jeep can now electrify the off-road crown jewel in the lineup. Jeep’s new Wrangler 4xe variant seems to be just the start of the movement. Jim Morrison, the brand’s top dog recently announced that Jeep would become the greenest “SUV brand” in America. Parsing that statement a bit it’s not too tall of an order since the only other “SUV only” brand in America is Land Rover, but it’s a start. Oddly enough, Jeep is also off ro a flying start with the new Wrangler 4xe. Somehow Jeep managed to make the least efficient PHEV in America the best selling plug-in hybrid in May of this year. Next on the PHEV trajectory will be Jeep’s best-selling model the Grand Cherokee. Not to be left out, Ford is also reportedly working on a hybrid Bronco. With Ford committed to electrification, it also wouldn’t come as a surprise if the Bronco eventually went all-electric at some point.

The success of the Jeep Wrangler, which is now the twelfth best-selling non-truck in America is the bottom line reason Ford decided to resurrect the Bronco. If the 2-door Wrangler was the only model and garnered a paltry 20,000 units a year, Ford would never have considered introducing a competitor. But with nearly a quarter-million sales in this oddly specific segment, Ford is betting they can enough of the pie to make the Bronco a success. The question will be: Bronco or Wrangler? But that’s a question for a different day.