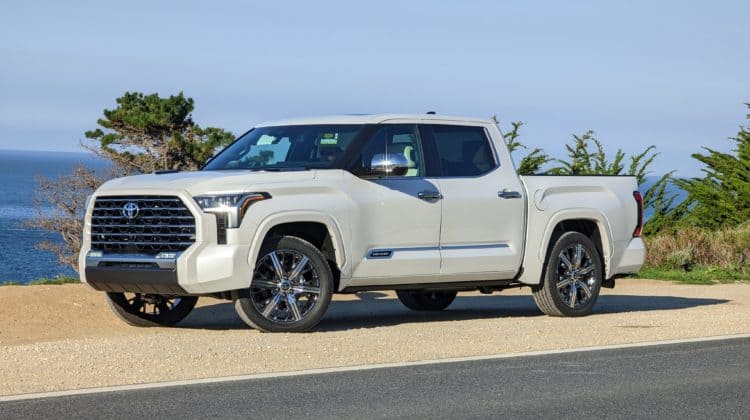 Since 2014, the Toyota Tundra’s highest trim level has been the 1794 Edition, which symbolizes the traits and history of the ranch property that Toyota’s Texas plant sits on. With a western brown color motif, it appeals more to those who get their shoes muddy at work but come home to impeccably clean dwellings. For the urbanites out there, the Platinum trim has been the best the Tundra has had to offer, until now. For 2022, Toyota introduces the hybrid-only Capstone trim, here to keep things competitive with Ford’s F-150 Limited and others.

The 2022 Tundra hosts one of the most controversial new front-end designs outside of the BMW brand. Alex and I are even split on some of the choices Toyota made to differentiate the Capstone trim from the subsequent ones, including the body-colored grille surround. On other trims this element is either chrome or black, but here it allows for a more integrated look that does a decent job of eliminating the brake-handle or mustache appearance. I think it looks fitting for the price of the truck, though Alex wishes there was a little more chrome. At the end of the day, the grille is still large and in charge, but it isn’t distracting thanks to the size of the truck. 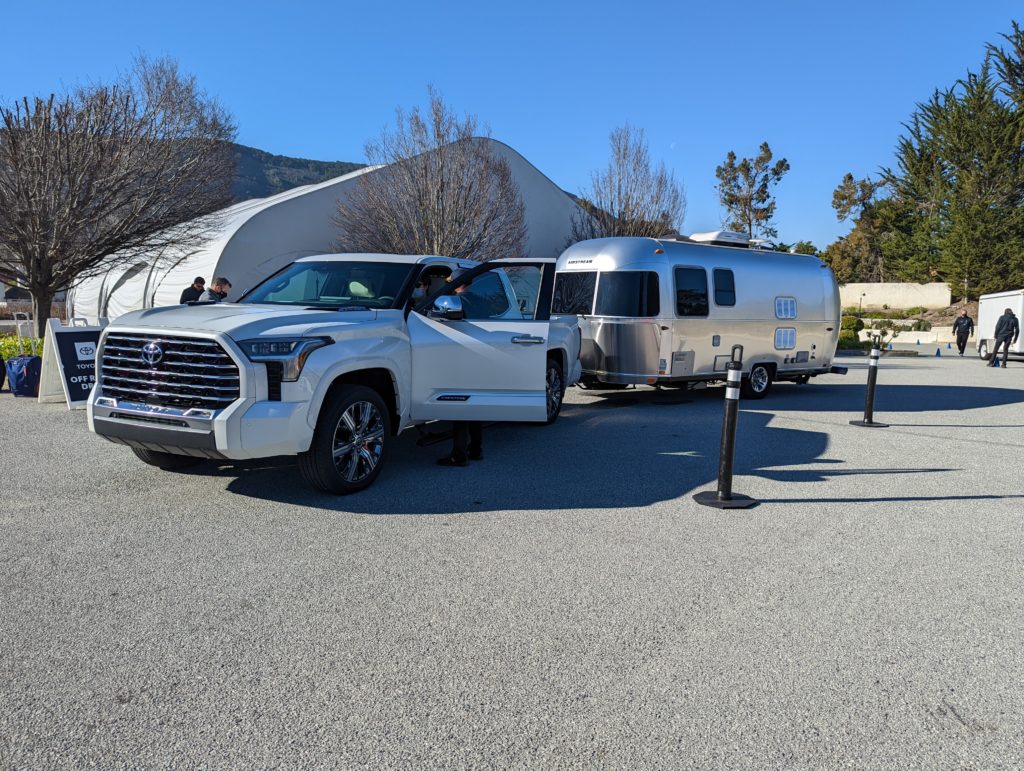 The Capstone comes standard with the first 22 inch wheels ever fitted to a Toyota model from the factory, but they actually look small on the Tundra! It doesn’t help that although wheels have been getting bigger over the decades, the 1/2 on truck’s growth over the same period is considerably faster.  It is quite a substantial vehicle, with chiseled lines over the wheel wells that easily draw your eyes to how long it is. The bars in the grille change from the 1794’s RAV4 Limited-inspired flute look to a gloss black and chrome chain link fence design. Aside from that, the rest of the design is nearly identical to the other top trims, with a tasteful amount of chrome around the sides. Toyota said that the rear tailgate’s T U N D R A stamping should be filled with chrome as well, though that wasn’t the case for the units we evaluated. Power-retractable running boards are standard, as is the tailgate release button integrated into the side of the left taillight module that also activates the power corner step. 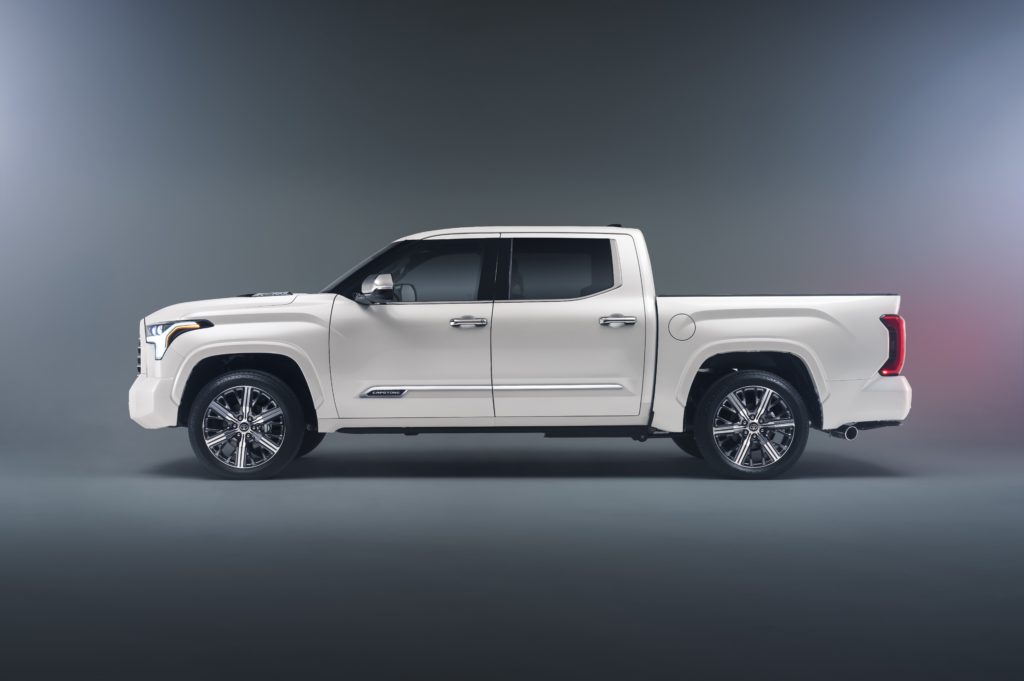 Inside, the Capstone is defined by a two-tone white and black color scheme. The leather gets upgraded to the semi-aniline variety, but no massaging functions are thrown in, a rather unfortunate omission at this price. (Although not all the competition offers this touch either.) It’s not like Lexus has an actual pickup to supersede the Tundra. You do get heating and ventilation for the four outboard seats, however. The open-pore American Walnut trim is soothing, the leather nice and plush, the panoramic sunroof a welcome purveyor of light (also available on Limited, Platinum, TRD Pro, and 1794). There’s also new ambient lighting that creates a nice nighttime vibe. I just can’t help but feel like the refreshed GM twins’ interiors might have a design leg-up for me, so I’ll have to wait and see them in person to decide. 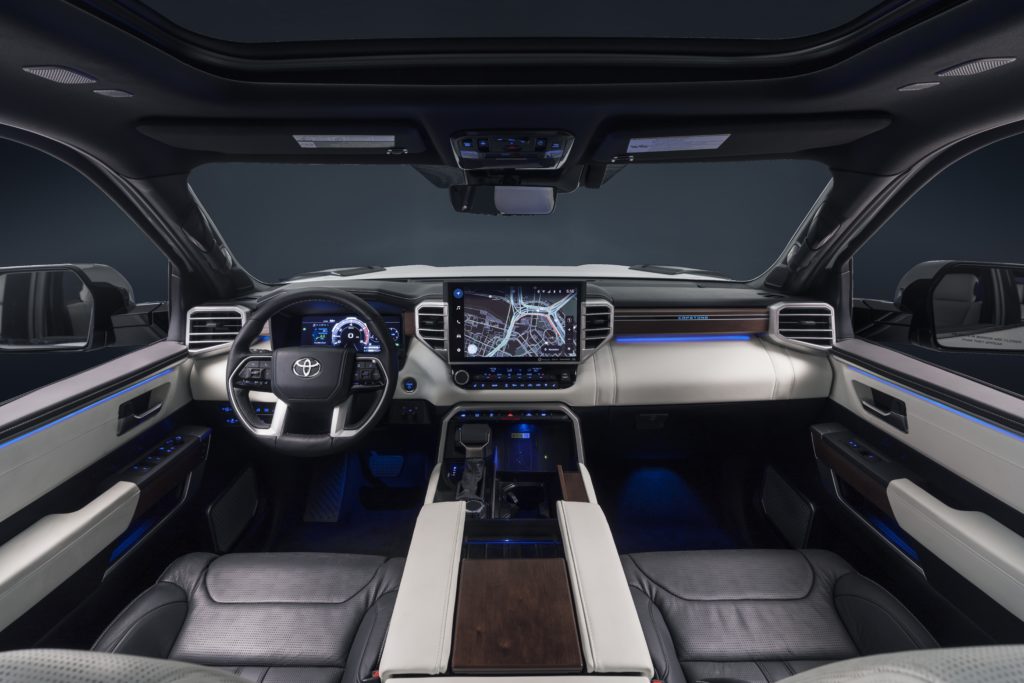 The Capstone is only available in the CrewMax cab size with a 5.5 foot bed, so rear seat space is cavernous. Hybrid shoppers should know that the CrewMax is the only way to get the electrified Tundra, but in other trims you can select a 6.5 foot bed if you’d like a bit more cargo capacity. As expected, there’s plenty of leg room and head room, but because the i-FORCE MAX’s hybrid battery lives directly underneath, there is no under-seat storage whatsoever. Lastly, the power-retractable full-width rear glass window returns to cater to the animals in your life.

The Capstone and TRD Pro Tundras come standard with the new i-FORCE MAX hybrid system, though it can be added to trims as low as the Limited for $3,400. With 437 hp and 583 lb.-ft. of torque on tap, acceleration is completely acceptable, accompanied by an impressive engine note from the twin-turbo V6. It is, of course, not as burly sounding as a V8, but I get a lot of joy out of hearing the turbochargers spool up. There doesn’t seem to be any pumped-in fake engine noise, at least to my ears.

An interesting twist with the Tundra is that even though the twin-turbo V6 ad 10-speed auto are tweaked versions of what’s found in the Lexus LS 500, the single-motor hybrid system is not related to the LS 500h at all. Instead of using the planetary power split hybrid system found in Lexus hybrids to date, Toyota opted for a system oddly similar to the Ford F-150 hybrid. In order from front to rear the system uses the exact same 3.5 liter twin-turbo V6 as the regular tundra, next we find a clutch pack to de-couple the engine from the transmission, a 49 horsepower pancake motor, a redesigned torque converter, and finally the same 10-speed automatic as the regular Tunrdra. Yep, this is a 10-speed hybrid. The 48 horsepower motor is responsible for driving the truck in EV mode at low speeds, regenerating power into the 1.87 kWh NiMh battery when braking, and providing nearly 200 pound feet of torque whenever it is needed. Toyota says they opted for this layout because it is more appropriate for towing, hauling, and off-roading than the 2-motor system in the LS.

My main gripe with this powertrain is its lack of refinement at times. For the price, the experience you have as soon as you let off the brakes and start accelerating is a mishmash of unwelcome vibrations and mechanical transitions. I kept feeling an odd rumbling sensation in the engine bay that was either the engine turning on or something else entirely. It’s not the worst experienced I’ve ever had in a hybrid, but it certainly wasn’t the best. Do note that I have not yet had a chance to drive a gas-only TT V6 Tundra, so I can’t compare this experience with that engine.

Out on a paved road, the Tundra is a pretty comfortable place to be. The 22s feel just about the same as the lower trims’ 20s in terms of soaking up imperfections. Being large wheels without four corner air suspension means they can only do so much to isolate you from the road. The RAM 1500 Limited’s air suspension is no doubt a smoother and more luxurious experience, but the real tangible improvement here is the rigidity of the platform. Now a box frame, you can definitely tell that there is less flexing going on in the rear of the truck. It feels a lot more connected than the last generation. The Capstone does not get a four-corner air suspension, unfortunately, but the rear suspension can be air-supported for load leveling and trailer duty if you select the Advanced Package. Toyota also throws in adaptive dampers and a color head-up display in that package, though we did not get to drive a Capstone with its box checked. Thankfully, along with the pleasing aforementioned engine note, road and wind noise are kept to a healthy minimum here. 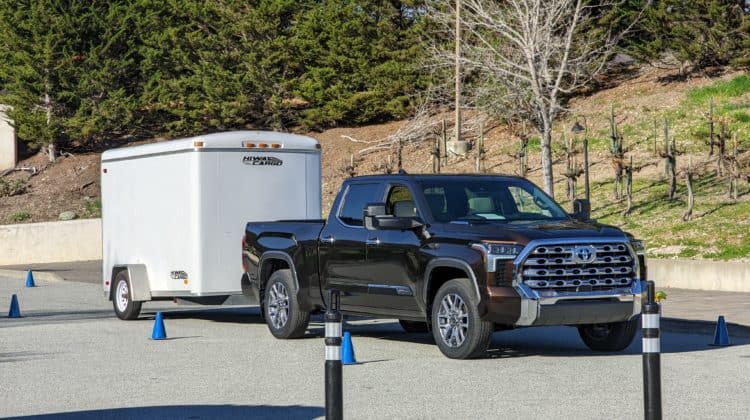 Toyota touts the i-FORCE MAX hybrid powertrain as towing and performance-focused, so while fuel economy does improve over the gas-only twin turbo V6, the delta isn’t incredibly impressive. We spent less than a day driving this engine, with hilly and windy roads being our most common encounter in Monterey, California. Our best number? 16 mpg. Toyota says the EPA rates the RWD hybrid at 20/24/22 city/hwy/combined, while 4WD models hit 19/22/21. That is what the Capstone model should be achieving since it is only available in 4WD. Limited, Platinum and 1794 trims without the hybrid receive 18/23/20 when 2WD, 17/22/19 with 4WD. It’s worth noting that despite the design similarities between the Tundra Hybrid and the F-150 Hybrid, the Ford is notably more efficient with one version hitting 25 MPG combined.

The Tundra Capstone starts at $73,530, placing it far ahead of the roughly $60,000 RAM 1500 Limited and Chevy Silverado High Country, but about $1,000 behind the Ford F-150 Limited. There’s only one package to add, the Advanced Package, that includes adaptive dampers, a head-up display and the load-leveling rear air suspension. Capstone and TRD Pro will come only with i-FORCE MAX, (part-time) 4WD, CrewMax cab, and a 5.5 ft bed. If you want a hybrid Tundra but don’t want to spend as much dough, you can grab a Limited 2WD hybrid for $52,300. Those lower trims also grant you access to different bed and cab configurations with the hybrid, which is a $3,400 upgrade on Limited, Platinum and 1794. 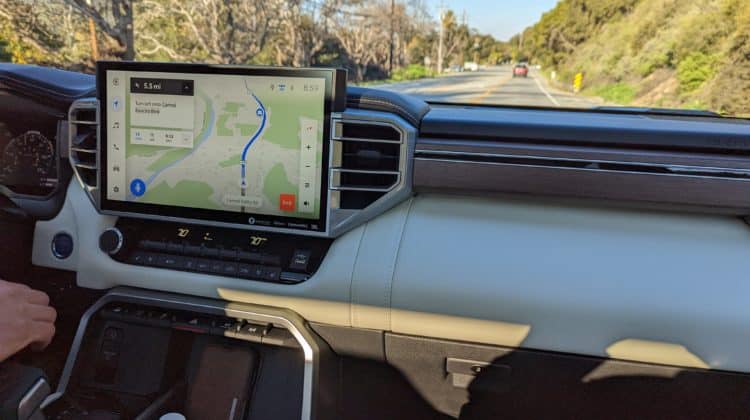 The 2022 Toyota Tundra is a breath of fresh air for the brand’s body-on-frame lineup. These literal dinosaurs have been roaming the earth since before Barack Obama was president, mind you. With the Capstone trim and the i-FORCE MAX powertrain, it is clear Toyota has been paying attention to the competition. At the same time, however, the GM twins have been through three generations of improvements in that period, while RAM’s current 1500 is still a better overall package and value. Alex and I agree that, while the Capstone is a very nice truck, it is not nice enough to pull domestic customers away from Limited and High Country trims. A few refinement issues and the lack of a some key features leaves us feeling like the big T didn’t do quite enough after 15 years. Tundra loyalists will be elated with it, as long as they are smitten with the design.

2023 Honda HR-V First Drive: I recently had the chance to spend some time … END_OF_DOCUMENT_TOKEN_TO_BE_REPLACED