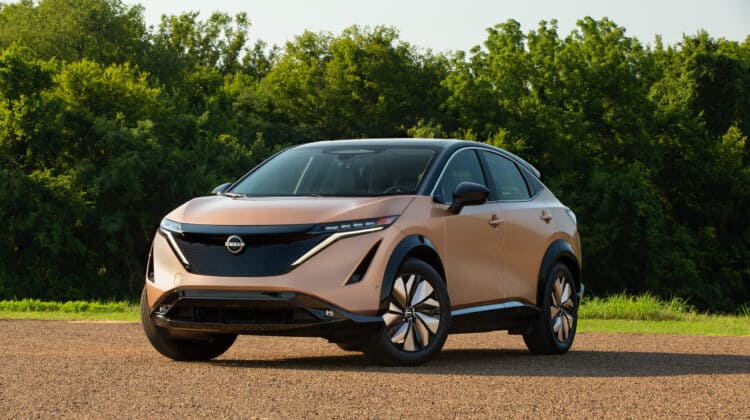 Nissan Ariya Pricing has been announced for the U.S., and the numbers might shock you. After numerous setbacks due to a variety of supply chain issues, we still haven’t seen Nissan’s next electric car hit American roads just yet. It was originally supposed to go on sale here in  2021, but it is now set to become available later this year. Already available in its home market of Japan, the Ariya has a mixed bag of specs. Around 22-kW AC charging but only 130-kW peak DC charging, up to 300 miles of range but only on limited trims, and a price that places it higher than some of the competition.

The Ariya will be available at launch in single-motor front-wheel drive format, with the ‘e-4ORCE’ dual-motor all-wheel drive coming later. A newly-announced Engage model will kick off the trim hierarchy at $43,190, followed by Venture+, Evolve+, Empower+, and Premiere topping things off at around $60,000. That base Engage model will also be getting an AWD ‘+’ variant, but the Venture+, Empower+, and Premiere will be FWD only. It’s a little bit confusing, if we’re being honest.

There are only two battery sizes available, 63-kWh and 87-kWh. The former produces 214 horsepower and 221 lb.-ft. of torque with a 216-mile driving range, while the latter will provide up to 389 horsepower and around 300 miles of range. Again, finding the configuration with the best performance and specs is a little tricky, as is finding a reason to choose this over a comparable Hyundai e-GMP platform EV.

For a better breakdown on 2023 Nissan Ariya pricing, head here.