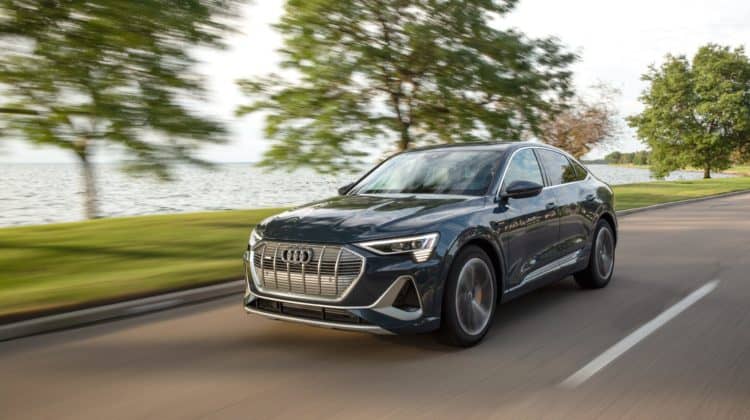 It’s time for another range test and this time we have the Audi e-tron Sportback alongside our trusty Ford Mustang Mach-E. These two are the latest EVs on the market and both promise over 200 miles of range per charge.

The Audi e-tron Sportback we enlisted for this range test is essentially a coupe-ified version of the e-tron battery-electric crossover. Like the Mercedes-Benz GLE Coupe, the e-tron Sportback has a roofline that descends quickly, giving more of a lifted sedan look. The e-tron Sportback’s two electric motors produce a combined output of 402 hp and 490 lb-ft of torque and are backed by a 95-kWh battery. The EPA rates the e-tron Sportback at 218 miles on a single charger, which is 5 miles less than the standard e-tron crossover. When it’s time to charge, the e-Tron Sportback can DC charger at a peak of 150 kW, allowing it to get to 80 percent in 30 minutes. Level 2 AC charging a depleted battery takes 10 hours.

In comparison, the Ford Mustang Mach-E makes 346 hp and 428 lb-ft from its two electric motors. Although its battery size is smaller at 88 kWh, the Mach-E can travel up to 270 miles per charge. It’s also able to DC charge at a peak rate of 150 kW, allowing it to charge from 10 to 80 percent in under an hour. The onboard 10.5 kW charger should allow from overnight level 2 AC charging from empty. There’s also an RWD long-range Mustang Mach-E, which is good for 305 miles per charge. However, it’s a single-motor model, meaning its power is down to 290 hp and 317 lb-ft.

So, how did the Audi e-tron Sportback do on the range test? Not too shabby, actually. Both vehicles were tested in their most eco-focused mode. The drive route is the same one we’ve used in other range tests and is roughly 244 to 245 miles depending on your route calculator. Half of the route is rural highway while the other is your standard freeway. There are some in-town sections and elevation changes, too, to give us a good sense of what to expect on a road trip. This range test also shows that higher speeds use more energy and won’t essentially get you back home despite the range meter saying you’ve got more than 50 percent charge remaining.

As a result, the Audi got to Gilroy, CA had 5 percent charge left, and could’ve gone another 15 miles. The Mache-E, on the other hand, still had 28 percent charge, allowing it to get back to the starting point with some range left. Credit the narrower tires on the Ford for allowing it to travel farther than expected.

At the end of the test, the Audi e-tron Sportback had a similar range to the Tesla Model Y we recently did a range test on. Based on the data we got, the Audi is good for around 225 miles per charge while the Mach-E is good for around 275 to 280 miles, both of which are similar to their respective EPA ratings. Keep in mind, however, the weather conditions, your use of climate controls, and other factors will affect an EV’s overall range.

If you’d like to volunteer your EV for a range test, email us at itsaconspiracy@alexonautos.com. Let us know what EV you have and make sure it has a range of at least 180 to 200 miles per charge to make it through the drive route used on this evaluation or get to a DC charging station.