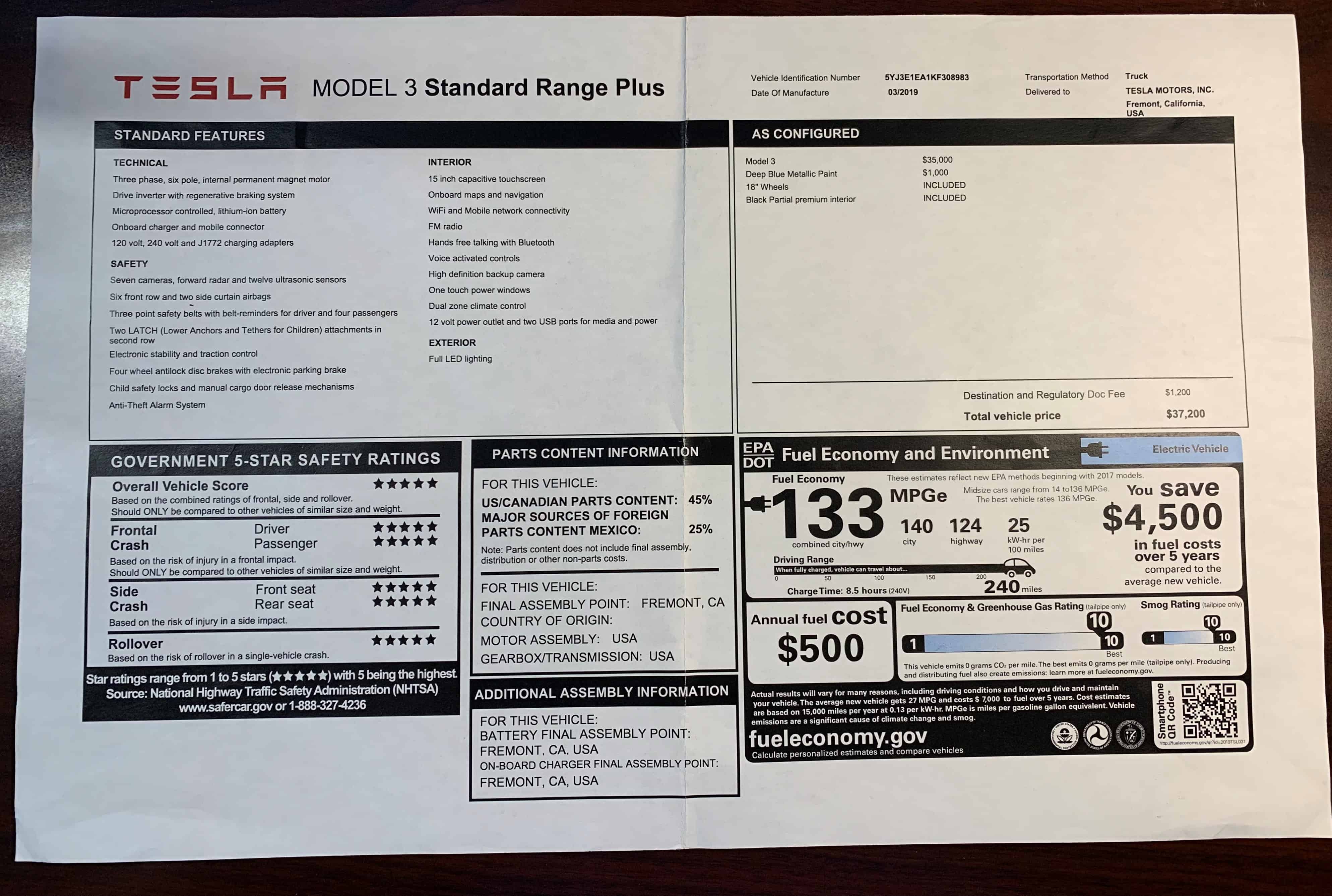 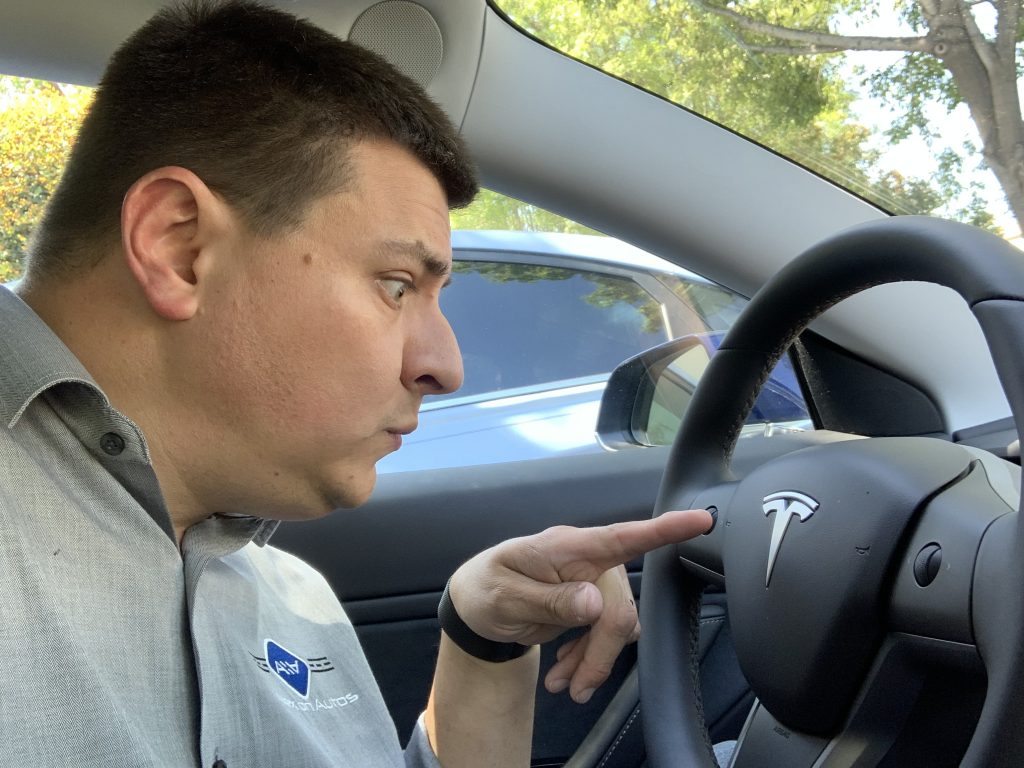 There have been so many questions and misinformation roaming around out there about the so-called “Model 3 Standard Range” vs the “Standard Range Plus” and whether or not the 220/240 mile range quoted is overly optimistic. In our recent video I said that the real world range of the Standard Range Plus was 190-195 miles, not the 240 advertised. Oh how that got people going… 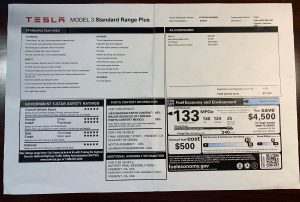 As you can see above, the federally mandated “Monroney” sticker clearly shows that the model is a Standard Range Plus and the EPA range is 240 (it’s below and to the left of the 133 MPGe rating). In addition, the car itself shows its range when fully charged as 240 miles as you can see below. 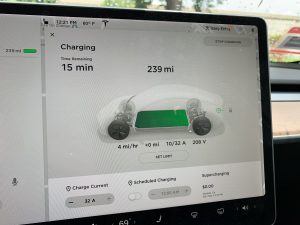 Now to the efficiency numbers! Or, rather sadly, time to do math.

The Model 3 comes with one of three different battery packs. There’s a 75 kWh capacity pack in the “Long Range” models, a 62 kWh pack in the “Mid Range” models (no longer available) and a new 50 kWh pack. Here’s where some confusion starts.

How Big Is The Battery?

Tesla indicated initially that the “Standard Range” model would get 220 miles of range and have a combined EPA score of 131 MPGe while the “Standard Range Plus” would get 240 miles of range and an EPA score of 133 MPGe. This lead to folks guessing that the so-called “SR” model would be a software limited version of the “SR+”. This logic also lead to folks assuming that the SR+’s battery pack would be rated at a higher usable battery capacity, perhaps 54 kWh or thereabouts.

While we may never know what the SR model was like (as none currently exist) we do know quite a bit about the SR+ sitting in our driveway.

The 54-55 kWh capacity that has been talked about isn’t a reality. How do we know? Because we have discharged our Model 3 SR+ down to below 5% and recharged to 100%. Charging at around 72 degrees outside with a 220V EVSE (32A capable) the car wolfed down about 51.1 kWh.

WHAT?? That proves the battery is bigger than 50 kWh! That’s a 54 kWh battery!

Not so fast, remember that the charging process is not 100% efficient AND that the car is consuming some power to cool the battery. Tesla rates this process at a “maximum efficiency” of 92% per the specs page but that number can drop down to 80% depending on a variety of factors. Assuming an 7% loss during our charging session (it was quite temperate that day) means that the battery’s capacity was 49.941 or just about 50 kWh.

Don’t believe me? Try the same thing with any EV out there, you’ll see a similar 8-20% loss depending on conditions and power source.

The Alex On Autos Range Test 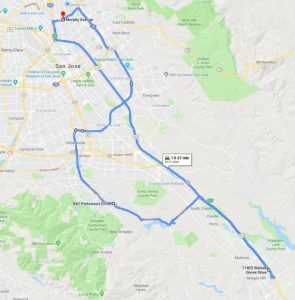 How do we test range? It’s really quite simple. First, we charge the battery to 100%. Then we wait until around 10 AM so that traffic is at its lowest and the travel times are the most consistent. In addition, 10 AM gives us the most uniform temperature possible in the Bay Area as this is a fairly temperate climate. Remembering that this is a “Real World” range test, the climate control is set to 70 degrees, the tire pressure is whatever the door sticker says we should use and we don’t spare the whip, we drive like anyone else would drive. Our loop takes us from San Jose to Morgan Hill, through Almaden on some rural highways with a slight elevation change but nothing too severe. Then on to some of Santa Clara County’s expressways where speeds are 45-50 mph and there are very few lights (this is generally favorable to range testing). Then we kick it on back top the office via Interstate 680 and repeat the process. The loop is approximately 61 miles. The model 3 completed the loop two times (122.5 miles) at which point we drove a four-mile suburban drive loop until the battery reached an indicated 10% state of charge. This occurred at 173.7 miles.

To verify the numbers, we plugged the Model 3 back in, let it charge, and noted a consumption of 49.1 kWh which is in the right range for a 9% loss due to cooling, inversion, etc. 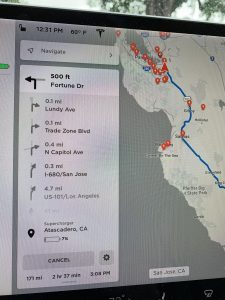 Because of the inherent losses involved in EV charging, it’s usually best to just consult the car and see what it thinks about consumption. Fortunately Tesla has one of the most advanced infotainment systems in an EV when it comes to displaying what the drivetrain is doing.

The easiest way to get what Tesla themselves considers a real world range figure is to enter a destination into the system and see what the car thinks will be left of your battery when you arrive. For instance, if we select this nifty Supercharging station in Atascadero it thinks it will take 93% of our battery to get there and that the route is 171 miles long. That works out to the car thinking out real world range on that drive is around 184 miles. (If we used the 7% of the remaining charge).

How about another one?

Let’s drive to the Supercharging station in Corning, CA. 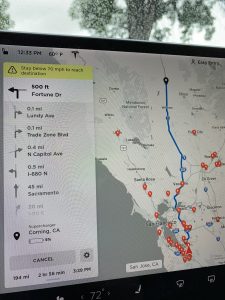 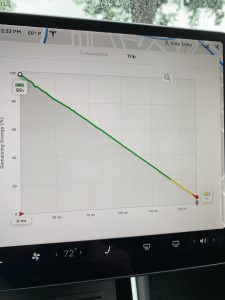 As you can see, the 240 mile range Model 3 isn’t quite sure it can make it there on a full battery. It’s 194 miles away, the elevation profile is quite flat, and assuming you keep your speed below 70 MPH the car thinks you’ll have 5% of the battery remaining. In a best case scenario this is 200 miles of range.

What’s Going On? Am I Being Lied To??

Remember that the so-called window sticker is nothing more than an estimate. Some estimates in the EV world seem overly optimistic, like the Standard Range Model 3 while some are cautious like the new Kia Niro EV. Also remember that the EPA range tests are calculated values based on the car being indoors on a dynometer for testing and there are a wide variety of environmental factors that impact range.

That said, let’s do some more math.

MPGe to kWh – The Numbers Don’t Add Up

Another number that doesn’t add up is the EPA rating vs the EPA range. 133 MPGe translated to, you guessed it, 3.9 miles per kWh. At that efficiency number you’d need to have a 61.5 kWh battery to get 240 miles but with the 50kWh battery you’d get just 195.

Now let’s compare that to the Kia Niro which isn’t as optimistic in regards to the EPA numbers. Kia is claiming a range of 239 miles, nearly identical to the Model 3 SR+. The Niro’s EPA numbers come in a 112 MPGe or 3.3 mi/kWh. That calculates out to 211 miles of range. To get the claimed 239 miles of range, you’d have to average about 3.7 mi/kWh. And what did our real world test indicate for the Niro? Right around 3.75 mi/kWh.

So there we have it. Real world range and the fun numbers that are the EPA EV range scores. Remember that the EPA does not personally test vehicles, the car makers test them according to the EPA procedures and the EPA selects a very small number to randomly test every year. Also remember that some companies chose to be conservative or aggressive when using those test results. So if a car company looks at the results of the test and says that’s a little too far for me, they can reduce the numbers and that’s just what Kia seems to have done with the Niro. Tesla on the other hand likely just used the numbers as they came out of the comptometer.