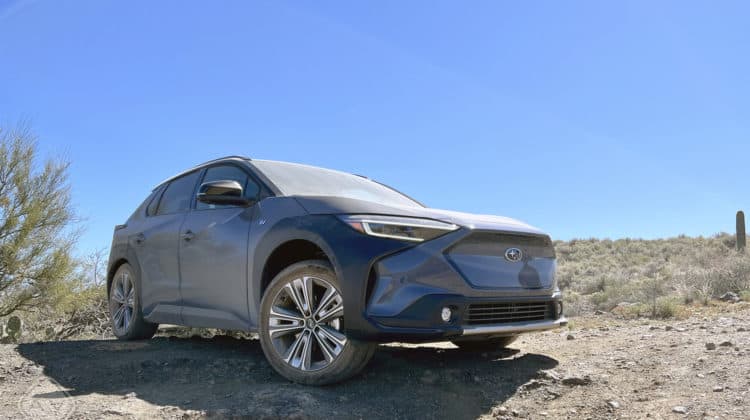 First things first, let’s talk about the elephant in the room. Subaru’s first ever EV was co-developed with Toyota, a logical partner since Toyota owns 20% of Subaru’s parent company. The Toyota version is called the BZ4X and should arrive around the same time as the Subaru, but without standard AWD which is a core Subie value. This isn’t the first joint venture by the two companies, but unlike the BRZ/86 endeavor, the EV JV was lead by Toyota, not Subaru and it does show inside and out.

The Solterra’s exterior looks a little RAV4, a little Forester, and perhaps a hint of Outback. Much has been said about the extensive use of black body cladding, but unlike many of my colleagues in the industry it doesn’t bother me at all. The matte cladding in the rear will help hide scratches from dogs to cargo coming and going, the enormous wrap-around panel in the front that gives white painted models a “raccoon” look is love it or hate it, take your pick. 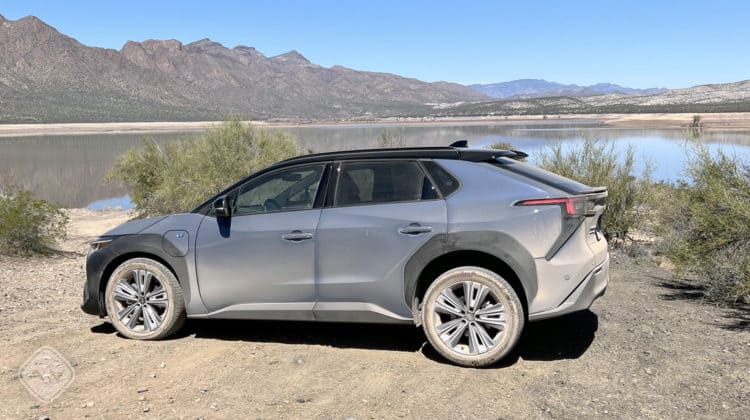 Unlike most modern Subarus, the lack of a boxer engine and longitudinal transaxle allow a short overhang and tight dash to axle ratio that looks decidedly modern and has off-road benefits as well allowing an improved approach angle vs most of the lineup. (It’s XX degrees if you’re interested) Yes, off-roading, the Solterra is the first mainstream EV with actual off-pavement capability baked into the design.

If you want something more off-road worthy than the Solterra (and perhaps the related BZ4X), you’ll need to pony up big bucks for a Rivian, F-150 Lightning, or one of the “boutique” EV maker’s wares like Bollinger. The Solterra’s capability starts with class leading ground clearance of 8.3 inches, well above the Mach E, ID.4, EV6, Ioniq 5, and other EVs under $70,000. Then Subaru tossed in extra battery protection for when the going gets rocky, and redesigned traction management software. 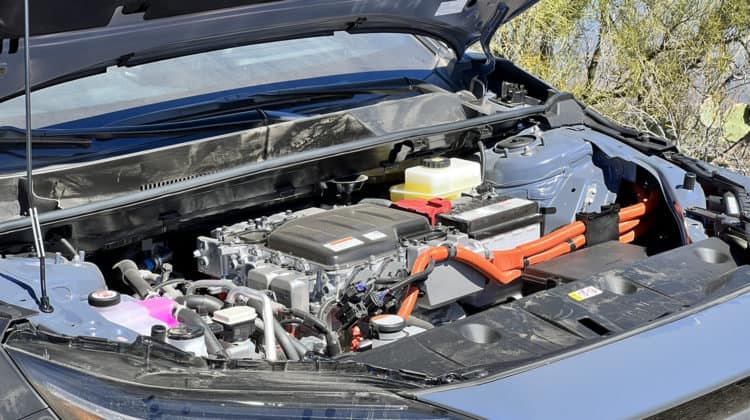 What Makes It Go?

Motive power comes from dual 109 horsepower electric motors, connected to open differentials. As with the Forester and Outback, the Solterra uses the front and rear brakes to direct power left and right, but Subaru says the system in the Solterra acts faster than in other models. The Dual X-Mode software found in Wilderness models has been further improved by a new crawl speed control mode.

All Solterra trims share an in-house assembled lithium-ion skateboard style pack co-developed with Toyota and based around the battery tech used in the Crosstrek PHEV. The pack has a gross capacity of 72.8 kWh and an unspecified usable capacity likely around 60 kWh. Charging happens via an on-board 6.6 kW charger that should charge the pack completely in under 9 hours. I would prefer a faster AC charger as this is notably below the 10-11.5 kW chargers found in key competitors, but more shoppers are likely to be concerned by the slow DC charge rate of 100 kW, significantly slower than the 250~260 kW peak rates found in new EVs from Tesla, Hyundai, and Kia. The slower rate means charging from 10-80% will take 56 minutes vs 18 minutes in an Ioniq 5 or EV6. 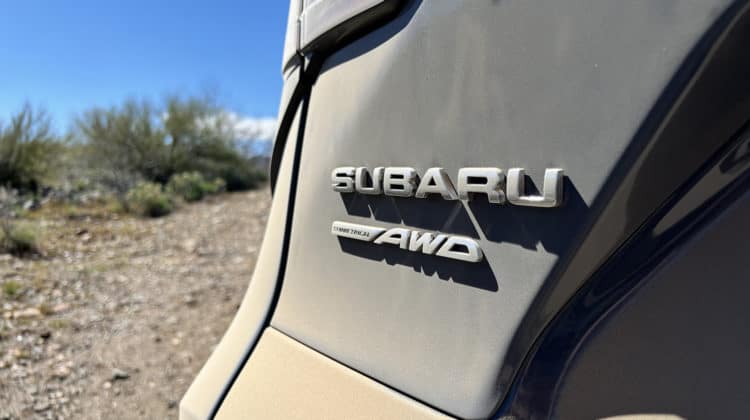 I have to admit, I’m torn about Subaru’s approach to charging. The slow charging rates will likely yield improved battery lifetime. Although Subaru has yet to publicly comment on this, Toyota says the identical battery in the BZ4X was designed to have just a 10% drop in range over a 10 year lifespan, which if true would be well above average. I wouldn’t be surprised if the AC charge rates are slower than average for similar reasons since charge rate certainly has an impact on cell life and capacity over time.

Longer drive practicality is obviously the downside here. A road trip to the way-back dirt trail the Solterra was designed for will take considerably longer when you need to stop every 200 ish miles for an hour-long charge. In general terms DC charging is rare, well over 95% of EV charging happens at home or at the office, but when you do need a quick charge, a slow rate is a drag. 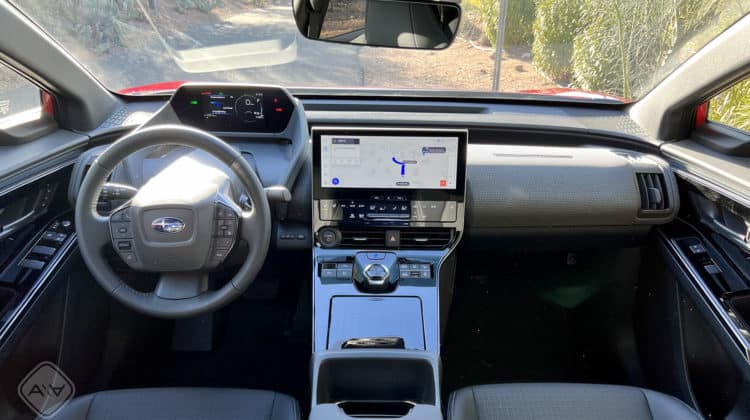 A Funky Interior For The 21st Century

As with the last Subaru/Toyota joint venture vehicle, the bulk of the interior is shared with the BZ4X, but unlike the BRZ/86 tie-up, this interior design was headed by Toyota. The broad, low dashboard is covered in fabric and to make the interior more roomy, Subaru deleted the glovebox. In the centre of the dash is either an 8-inch or 12.3-inch infotainment screen running a variant of Toyota’s new connected software. The borrowed tech allows wireless CarPlay, an integrated voice assistant, and internet connected navigation. Unlike other Subarus, phone app control would need a different app download and you’ll need to pay a subscription fee to keep the connected services and navigation functioning after the trial period.

The most controversial design in this cabin is the steering column and instrument cluster. The 7-inch display is placed high on the dash and right against the windshield in a position halfway between a typical gauge cluster and a head up display. The location is more practical than I had thought by allowing your gaze to stay closer to the road. Connecting to the display to the dash is are large plastic “arms” that twist as they spread from the cluster. The look is decidedly futuristic, but I must say I’m not a fan. Futuristic likes or dislikes aside, the only functional gripe I have with the Solterra’s interior is the lack of a glovebox. However, you should know that the steering wheel position is unusual. Because of the screen’s location you’re supposed to adjust the wheel so you’re looking above the wheel rather than through it. 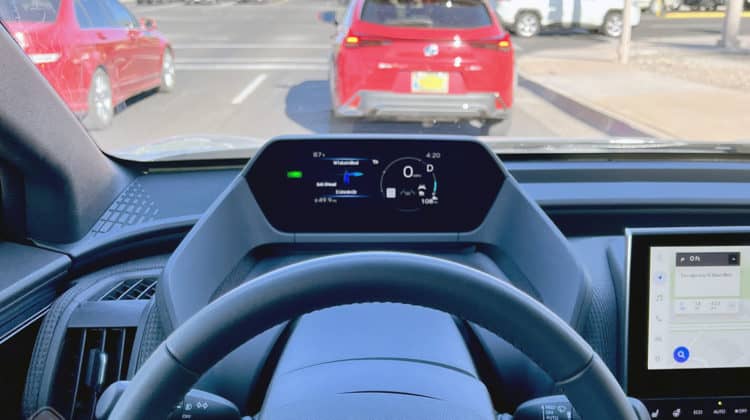 In the centre of the dash is your choice of a standard 8-inch touchscreen or optional 12.3 inch screen shared with the Lexus LX. Also shared with the Lexus is the infotainment software which features full-screen wireless smartphone integration, internet connected navigation, integrated streaming audio from Apple Music or Amazon, and natural language voice commands. As I’ve noted in the Lexus and Toyota models that use this generation of their software, the main downsides is that navigation requires an internet connection and a subscription. On a backroad at a national park and need to get directions home? Pull out a paper map, this system can’t help you there.

The front seat designs are similar to other Toyota seats with manual adjustments in the base trim and a power driver’s seat in upper trims. Bolstering is well designed for bumpy roads and the seats proved supportive over a day of driving. The cabin has a roomy feel to it, but it’s hard to compare things as Subaru has yet to release official legroom or headroom numbers, hopefully those will be released before it goes on sale. 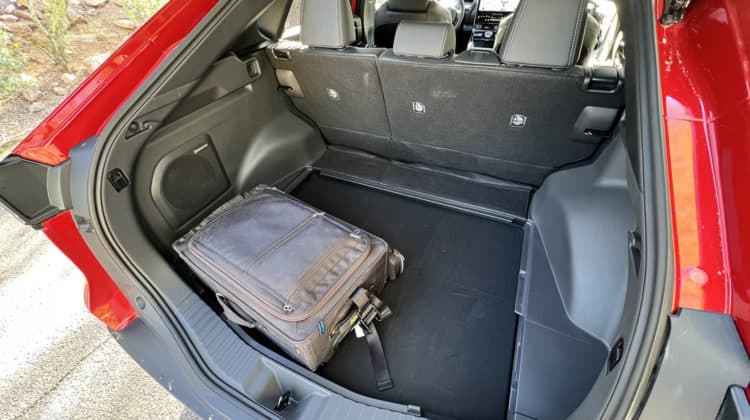 How much can it haul?

Behind the optional power hatch you’ll find 30.3 cubic feet of storage space including the space under the load floor. This puts the Subaru ahead of the new Ford and Kia EVs and essentially the same as a 2-row Model Y. Want a front trunk? You’ll need to shop elsewhere because Subaru elected for a short hood design which precluded a frunk. How about verses other Subarus? The Outback will hold 32.5 cubes and the Forester 28.9.

If you need more space you can add a roof cargo carrier or roof tent with a static load suitable for a party of three. Need to tow? Get that Forester, the Solterra will be available with an “accessory hitch” at some point later but the tow rating is zero. 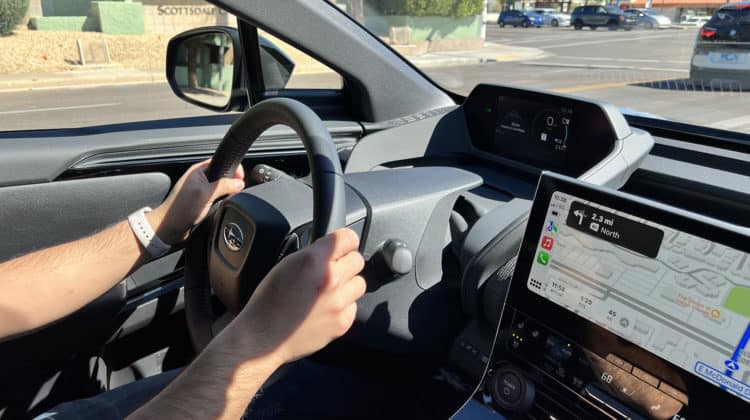 How does it drive?

When it comes to EVs, forget everything you’ve been told about horsepower, torque, and power to weight ratios as absolute harbingers of performance. The reason? There is little consistency when it comes to how and when full power is delivered. In the Volkswagen ID.4 for instance full power doesn’t happen until around 40 MPH vs 25 MPH in the Solterra which is likely the reason the Subie zipped to 60 just 2/10ths slower than the last AWD ID.4 we tested despite having a 77 horsepower advantage on the Subaru. A 6.0 second 0-60 time also compares favourably against the base motor options in the Mach E, EV6, and Ioniq 5.

With just 4,505 lbs of curb weight to haul around in the heaviest trim, the Solterra feels positively svelte in comparison to a fully-loaded AWD Mach E, but in truth ride quality rather than handling is the main beneficiary. With high ground clearance comes the ability for longer suspension travel and that means it’s simply easier to design a comfortable suspension to damp the 4,505 pounds of Subaru. The result is a ride that’s substantially similar to the Outback. If you’re interested in a firm, sporty ride then you’ll want the Mach E or Model Y, if you want something tuned towards the comfortable side for daily commuting, this is the EV for you. Base models are shod with 235/60R18 all-season tires while the Touring trim I spent most of my day in had 235/50R20 tires which still offer more sidewall than average. 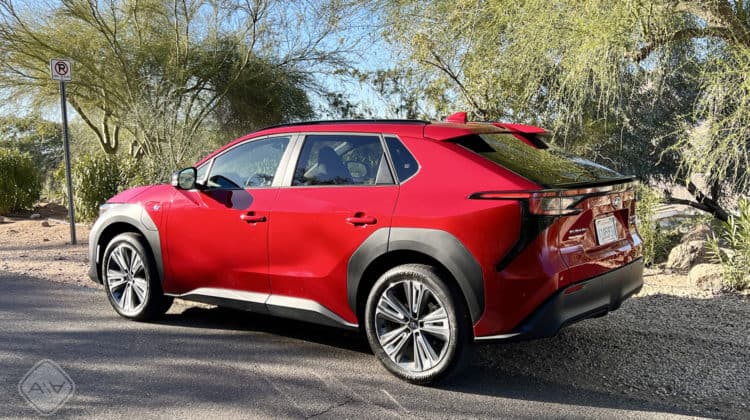 Much like yours truly, Subaru doesn’t seem to be a fan of “one pedal driving,” instead opting for what they are calling “S-pedal.” Here’s how it works. Once engaged the vehicle has aggressive throttle lift-off regen that feels much like “one pedal” in other EVs, except that around 3 MPH when regen stops and the Solterra does not blend in friction brakes like most one pedal vehicles. This does not effect the total regen braking potential of the Solterra as it uses a blended braking system like most EVs except Tesla.

Subaru’s EyeSight active driver assistance tech is standard, just as you’d expect, but unlike other Subaru models the hardware behind the “EyeSight” name is all Toyota. This means standard radar (rather than stereo camera) based cruise control, autonomous braking, pedestrian and cyclist detection, lane centering, and blind spot monitoring. Top end models also have a 360-degree camera system that should prove useful off road. 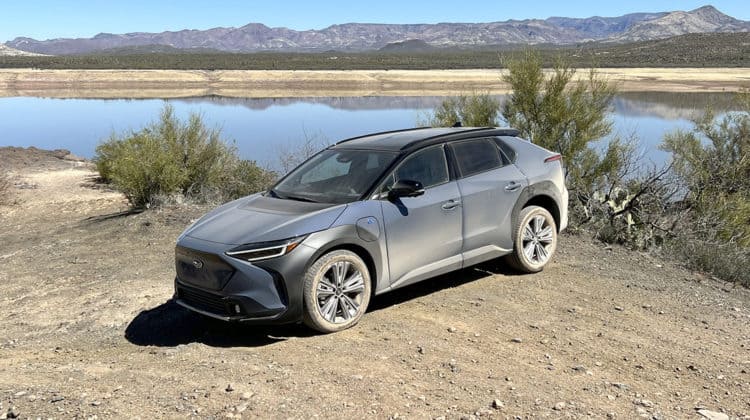 We Don’t Know All The Details

The one major detail Subaru has kept secret so far is the price tag. Based on the standard dual-motor drivetrain and standard active safety tech, I estimate the starting MSRP should be in the $45,000-$47,000 range but we’ll know more closer to the on-sale date this summer. It seems unlikely that Subaru will attempt to challenge the ID.4’s position as least expensive AWD EV in the USA. On the other hand it’s likely the Solterra will be one of the best EV values in America if you value cargo space, legroom, and standard AWD. 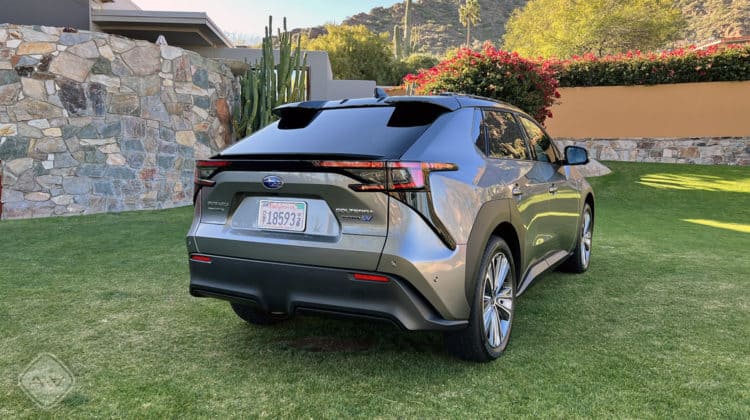 If you were expecting class-leading DC charge times, Tesla-like acceleration, a ginormous front trunk, and a huge battery, then you weren’t expecting a Subaru EV. Subaru, like Toyota, tends toward pragmatic engineering solutions and conservative hardware designs. If you’re looking for faster charging, or any of the above, there are plenty of other EVs out there. In another EV, things like the slower charging or shorter range might be a problem, consider that the Solterra is the only off-road oriented crossover EV under $70,000. The Solterra seems unlikely to convince many Mach E, Ioniq 5, or Model Y order holders to jump ship, but it’ll certainly keep EV intending Subaru owners from leaving the Subaru family, and that’s just what Subaru wants at the moment.