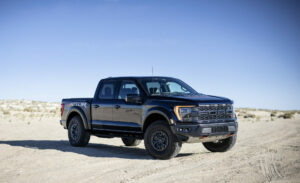 Ford Unveils the 2023 F-150 Raptor R: After years of speculation and buildup, Ford has finally revealed the pinnacle of its off-road performance brand with the Raptor R variant of the F-150. The original F-150 Raptor came out as a 2011 model year with a V8 bang, and has been a cultural success for Ford. A second generation emerged with cutting edge technology in 2015, like a … END_OF_DOCUMENT_TOKEN_TO_BE_REPLACED