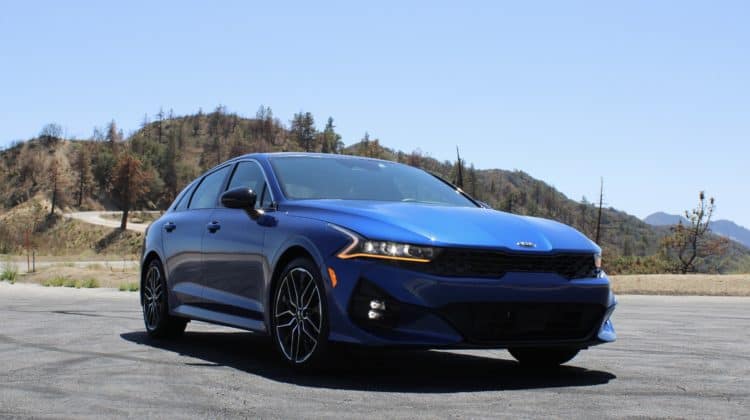 Let’s face it, sedans are out, long live the crossover. However, if you’re among the few left that still wants one and is looking for something affordable and fun to drive, place the 2021 Kia K5 GT at the top of your shopping list. This is ones of the few mainstream midsize sedans that have real sporting capabilities. Alongside its mechanically related sibling, the Hyundai Sonata N Line, the K5 GT turns up the wick quite a bit. It’s the first time we’ve seen legitimate performance credentials in this class for some time. The last time was back in the 2000s when cars like the Mazdaspeed6, Nissan Altima SE-R, and Subaru Legacy GT existed. This time, it’s Korea that hands us fire-breathers, and both cars back up their claims with the right moves.

Quite possibly the most important aspect of the 2021 Kia K5 GT is that it never forgets it’s a midsize sedan. It is what you expect out of it quite well from the comfortable ride to quiet interior and generous interior and trunk volumes. There’s a lot of practicality there, meaning it successfully fulfills its duty as a family car. In addition to all of the sensible stuff, the K5 GT is a fire-breather with near-weapons-grade capabilities. Hyundai Motor Group’s new turbocharged 2.5-liter turbo-four makes 290 hp and 311 lb-ft of torque in this application and provides prodigious power, meaning it’s easy to get to “arrest-me” speeds without even knowing it. The new eight-speed “wet” dual-clutch automatic transmission, which is shared with Hyundai’s full-fat N cars, is snappy, smooth, and responsive to the point that it feels like the Koreans had taken a Volkswagen Group DSG transmission, added two gears, and re-engineered it to make it even better. In fact, you need to find all the tell-tale signs to know that it’s a DCT with the most obvious one being the car rolling backward on an incline.

Once you’re on the road, you’ll immediately notice the impeccable suspension balance. The K5 GT happily attacks corners and doesn’t have much body roll when pushed hard. At the same time, it still rides well and does a great job keeping harsh impacts out of the passenger cabin. Together with quick, accurate steering with a good feel, the car shrinks around you and drives smaller than its size would suggest. The superb levels of impact harshness further add to the K5 GT’s compelling ride and handling balance. Even its cousin, the Hyundai Sonata N Line rides stiffer and doesn’t keep sharp impacts out as well as the Kia does.

The only thing that needs to change in the K5 GT is the tires. The standard Pirelli P Zero All-Season rubber lacks the necessary grip to handle the finely tuned suspension and the powertrain’s output. It’ll easily do burnouts in the first three gears, as evident in Alex’s experience with the car. When using launch control, the car’s electronic nannies work overtime to make sure the front wheels hook up. Once it does bite and hold, though, the car carves through corners gleefully. A nice set of summer performance tires should solve all of the K5 GT’s traction issues.

All of the traditional Kia virtues are in the K5 GT too. Great material quality and a nicely insulated cabin add a sense of sophistication from behind the wheel. Although it’s not as quiet as the standard K5, the GT is still surprisingly hushed on the highway, especially by midsize sedan standards. Four people and their gear will fit comfortably even with that swoopy silhouette. The infotainment system is easy to use, too. Despite the lack of a tuning knob and use of haptic feedback shortcut controls, the interface isn’t finicky and doesn’t require hours to learn its functions. We would like to see the 12-speaker Bose audio system get an improvement, though. While it sounds good, its volume levels don’t go up consistently and jump suddenly when you turn it up past a certain point.

Kia’s driver assistance features will come in handy during long commutes and road trips. Highway Driving Assist, which combines the functions of steering assist, adaptive cruise control, traffic jam assist, and lane centering, takes away the stress of traffic or long-distance driving. It keeps you centered nicely and doesn’t get intrusive with its inputs. The car flows with traffic seamlessly and will even slow down if someone cuts you off just to make sure you don’t rear end that vehicle. Best of all, Kia tuned the system so it’s neither too conservative nor too aggressive, making it feel more natural versus the driver assists found in competitors like the Toyota Camry.

The 2021 Kia K5 GT won’t sell in huge numbers mainly because it’s a performance variant, a range-topping variant, and it’s a sedan. Those who end up putting one in their garage will have one of the best sports sedans on the market today. Not many sedans can get close to the K5 GT when it comes to doing everything well. Yeah, the Hyundai Sonata N Line gets stickier rubber and more tech features but the K5 counters with more creature comfort and better chassis balance. For 2022, Kia also added a surround-view camera option as part of the GT1 package, something you can’t get in the Hyundai.

The Kia K5 GT stands out because it’s so well-balanced. It’s the same reason cars like the BMW 3 Series used to be the gold standard since they did nearly everything well. In the mainstream sedan space, the K5 GT is that sedan, it blends fun, practicality, technology, and value all in a package that punches above its weight. For the $35,705 as-tested price (including the $965 destination fee), you’re getting a hell of a deal for a sports sedan that does what it’s supposed to and then some.