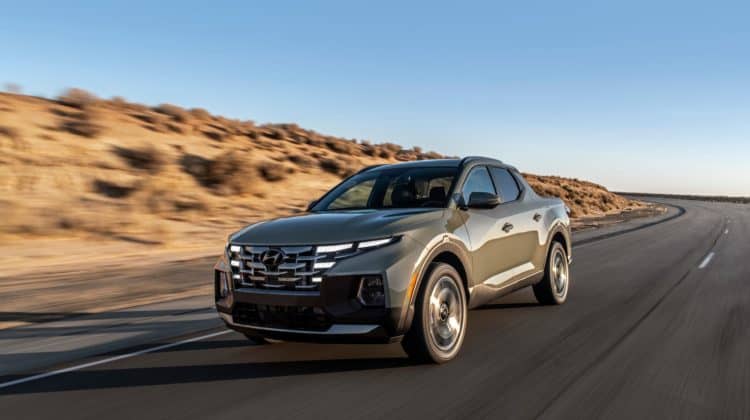 It’s finally here! The long-awaited 2022 Hyundai Santa Cruz has arrived, reviving the compact pickup segment with a cool, distinctively styled entry. Underpinned by the same platform found under the Tucson compact crossover, the Santa Cruz is a true small truck, slotting below midsize entries like the Chevrolet Colorado, Honda Ridgeline, and Toyota Tacoma. The Santa Cruz doesn’t hide the fact that it’s based on the unibody architecture of the Tucson and looks like a compact crossover with a bed.  In terms of size, the Hyundai Santa Cruz is significantly smaller than your average midsize truck. The truck is at least 10 inches shorter than the smallest entry in the segment above it and is sized more like Hyundai’s own Palisade and the Honda Pilot. As a result, the Santa Cruz revives a long-dormant segment that has been quiet since the demise of the previous generation Ford Ranger.

Although the Hyundai Santa Cruz’s bed only measures 4.3 feet, it has several neat features that add flexibility. Like the larger Honda Ridgeline, the Santa Cruz has an in-bed trunk that can double as a cooler since it has a drain plug.  There are small storage cubbies on the side of the bed and tie-downs to keep your gear from sliding around. Hyundai also added a built-in lockable roller cover to hide whatever you’ve got in the bed.

The Santa Cruz’s cabin is essentially the same as its sibling, the Tucson. However, Hyundai ditched the hunt and peck gear selector buttons for a traditional mechanical lever. Other than that, the rest of the interior is virtually similar between the two. You get the flowing center stack without physical buttons and knobs for a clean look and the hoodless digital gauge cluster on higher trims. The rear seat cushions also fold up, adding more practicality. More expensive variants should get features like a large 10.25-inch main touch screen, heated and ventilated front seats, and a Bose audio system. Hyundai’s full suite of driver assistance features will be available. It should include everything from collision prevention technologies to Highway Driving Assist, which helps ease the daily commute by enhancing adaptive cruise control with steering assist, traffic jam assist, and lane centering.

Under the hood, you’ll find two 2.5-liter four-cylinder engines to choose from. Standard is a 191-hp naturally-aspirated unit paired to an eight-speed automatic transmission. If that’s not enough the turbocharged version has over 275 hp and comes with an eight-speed dual-clutch automatic. The Santa Cruz’s more powerful engine is also the one you want if you’re looking to tow because it’s rated to haul up to 5,000 pounds. AWD will be available across the Santa Cruz lineup.

Due to its unibody underpinnings, the Hyundai Santa Cruz will be one of the only trucks equipped with an independent rear suspension on all models. Like the Honda Ridgeline, that should yield a more car-like ride and avoid the bouncy rear end usually associate with driving trucks with an empty bed. On-road driving dynamics should also mirror a crossover instead of a pickup because of the fully independent suspension.