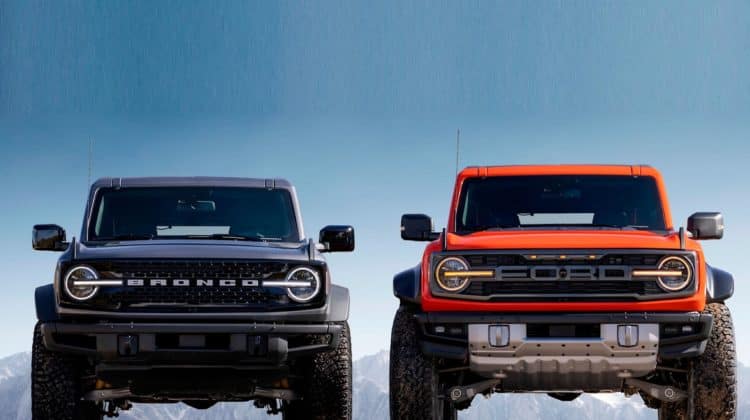 Bronco Raptor emerges from the sand.

Like the standard Bronco’s return in 2020, the anticipation and hype surrounding the all-new Raptor variant has been substantial. The success of the F-150 Raptor meant it was only a matter of time before the Bronco would receive this treatment, and the final product checks off almost every single box. It is both the most powerful Bronco ever produced and the most off-road capable.

To start, Ford has widened the Bronco’s track by 8.6 inches, giving it a much more substantial presence that is supplemented by the largest tires ever fitted to a production vehicle – 37 inches. New shock towers increase wheel travel by 60% in the front and 40% in the rear, and new cross bars and reinforcements boost torsional rigidity of the body by over 50%. Minimum ground clearance is up 4.8 inches over the standard model to a staggering 13.1.

The engine? That’s going to be Ford’s twin-turbo 3.0-liter EcoBoost unit, not the 3.5-liter found in the F-150 Raptor that was expected. That motor produces 450 horsepower and 510 lb.-ft. of torque, but Ford says they are shooting for over 400 horsepower with this EcoBoost. At the end of the day, many people will still look at the Raptor family and wonder why there isn’t a V8 on offer. Jeep will sell you a Wrangler 392 with its 6.4-liter V8 and 470 horsepower, but that comes in at $75,095. The Bronco Raptor? $69,995, on sale this Summer.