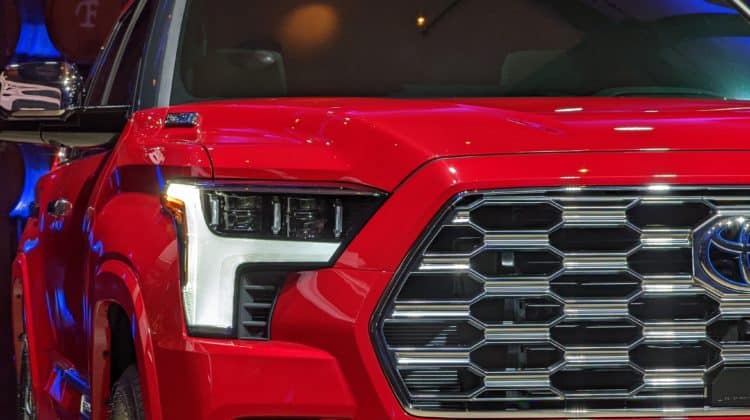 Alex and I were on-site at the launch of the all-new Toyota Sequoia in Carmel, California today. If I rewind to my 5th grade year at Greensboro Academy, I’m taken back to simpler times when the previous generation was new and Barack Obama was on his way to becoming President for the first time. A lot of things have changed since then, but the Sequoia mostly remained the same. Two or more generations of the competition came by in that time, allowing them to grow from their mistakes and create extremely compelling offerings in their current iterations. Let’s see how much Toyota learned in that time and whether or not it paid off with the 2023 Sequoia.

Right off the bat, Toyota’s CALTY design team hit this one out of the park. Predictions that the Sequoia would adopt the exact same front design treatment as the new Tundra’s were squashed, as this application closes off the bottom of the grille in a more similar fashion to the Highlander and RAV4. Though I do not dislike the Tundra’s jaw-dropped look, Alex and I both agree that this look is much better and more cohesive. At the event were two models, the new Capstone trim and the TRD Pro, which debuted on the Sequoia during the 2020 model year. The latter looks properly tough while the former screams ‘new’, ‘fancy’, ‘expensive’. I spoke to one of the chief engineers and learned that the Sequoia is larger in size than the new global Land Cruiser/Lexus LX, and it certainly looks like the chunkier and more chiseled of the three.

Inside, the Sequoia’s dashboard carries over mostly untouched from the Tundra. Because that model’s torsion beam rear axle is also present, the Sequoia’s third row does not feel much larger than the outgoing model. Also factor in the hybrid battery pack that lives underneath the third row in all Sequoia models. To make up for that, Toyota added the option to slide the seat fore and aft by 6 inches. It splits 60/40 and increases effective leg room when pushed all the way back in its tracks, but your head will be touching the ceiling in that position. They also decided to make up for the fact that the third row doesn’t fold down into the floor by creating a configurable cargo platform that can be set at different heights. The glass portion of the tailgate can open on its own, so when the shelf is at its highest level, items can be easily accessed from there.

In a surprising move, the Sequoia will only be offered with the iFORCE Max hybrid powertrain. This is an option on Tundra (though standard on TRD Pro and Capstone trims). It will produce the same 437 horsepower and 583 lb.-ft. of torque and can tow 9,000 pounds, a 22% increase over the old model. The 2023 Sequoia will be assembled at Toyota’s manufacturing plant in San Antonio, Texas, and will go on sale in the Summer. Pricing will be revealed closer to launch.