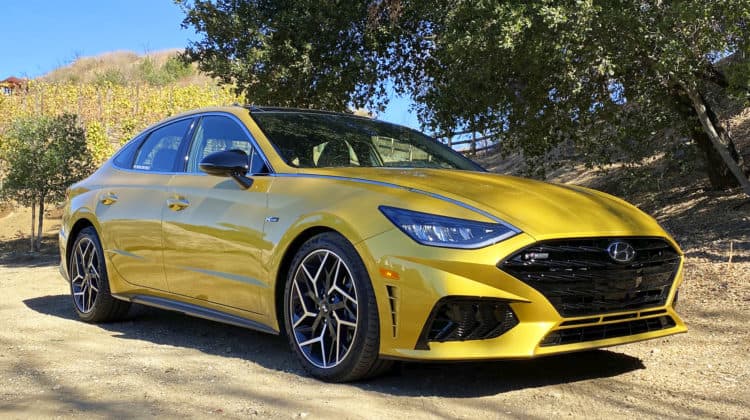 The Hyundai Sonata N-Line is the car that any number of companies could have built and should have built. But for a variety of reasons, only Hyundai and their sister company Kia are willing to build a crazy-fun and oddly affordable family sedan.

Hyundai is a company with something to prove, probably because they haven’t been around all that long. Mercedes claims to be the oldest car company in the world with a start in 1883, Hyundai on the other hand didn’t build a car until 1968 and it wasn’t even their own car, it was a Ford Cortina. In 1975 they made the Hyundai Pony but it was powered by Mitsubishi engines, and it wasn’t until 1992 that Hyundai designed and built their own engines without external partners. From their very start Hyundai has been the kind of company that gathers expertise, then improves and expands with the next generation.

By the late 90s, Hyundai was known as the company that produced inexpensive transportation. Cheap to own, cheap to run. That wasn’t enough. Hyundai decided they needed to be the leader on the quality charts so they bumped their warranties farther than the competition (up to 10 years and 100,000 miles for the powertrain) while doubling down on quality. It worked and Hyundai’s reliability scores soared.

Next Hyundai decided they didn’t want to be the “Korean Toyota”, they wanted to be the automaker that leads, rather than followed. In the 2000s they invested in hydrogen fuel cells, hybrids systems, rear-wheel-drive-based luxury platforms, new transmissions, new engine families, and battery electric vehicles. 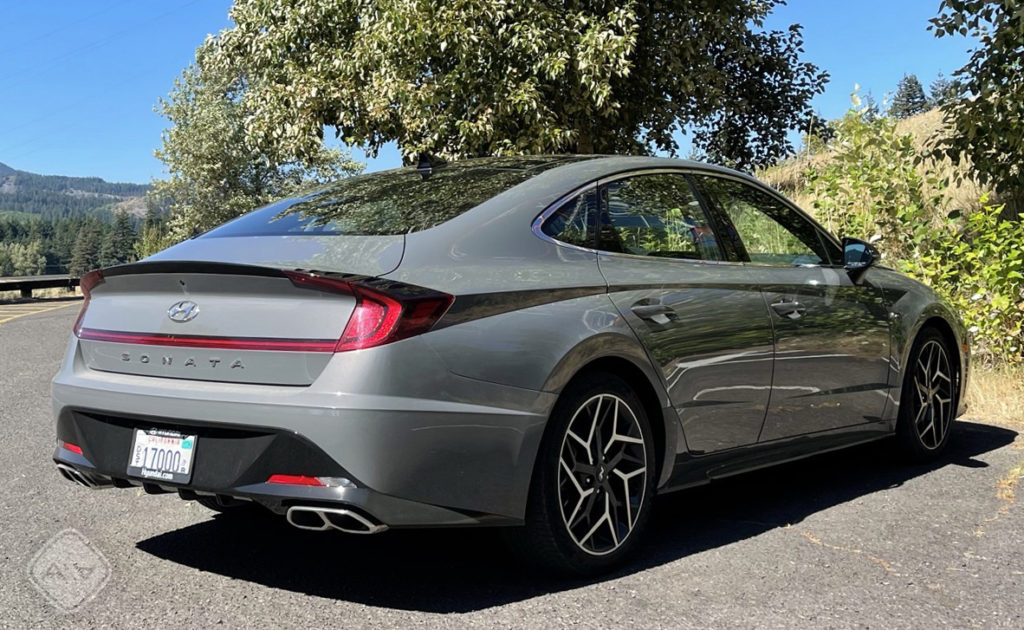 Let’s get back to the Sonata. The 2021 Sonata is the first generation of Hyundai’s family sedan after the brand decided to turn over a new page on design. Rather than making every vehicle in the lineup look like a Russian nesting doll, the new designers decided it needed a unique look. That look? Um. Hungry.

While some have called the Sonata’s massive maw a “catfish grille,” and I would have to say I prefer the more subtle looks of the Honda Accord, you can’t call the design derivate. After all, I’d rather be a catfish than a copycat. The look has certainly grown on me, and aside from the side of the hungry grille, I think the entire design is executed rather well.

If the N-Line’s 2.5L turbo sounds familiar, that’s because Hyundai isn’t just using it in N-Line models. You’ll find a version of this engine under the hood of the Santa Fe and even when rotated 90 degrees, the Genesis GV80 as well. Under this hood, it is tuned to 290 horsepower and 311 lb-ft of torque. Power is sent to the front wheels only via a new 8-speed dual-clutch transmission. Unlike Hyundai’s 6-speed and 7-speed DCTs, the new transmission design puts the clutch packs in a fluid bath to improve shift quality, a trick we see in luxury segment DCTs like the ones Audi uses.

On the inside, the Sonata is far less controversial, but as with the exterior styling, interior styling marches to a different drummer than some of Hyundai’s other new vehicles for 2021 and 2022. All N-Line trims get a large 12.3 inch LCD instrument cluster and the larger 10.25-inch infotainment system from the other Sonata trims. However, you should know that the infotainment screen lacks wireless CarPlay and for some odd reason, there are several features you just can’t get in the N-Line. For some reason, the head-up display, matrix LED headlights, parking sensors, ventilated seats, a power front passenger seat, heated steering wheel, and 360-degree camera system are all reserved for the Limited trim with the less powerful 1.6L turbo. 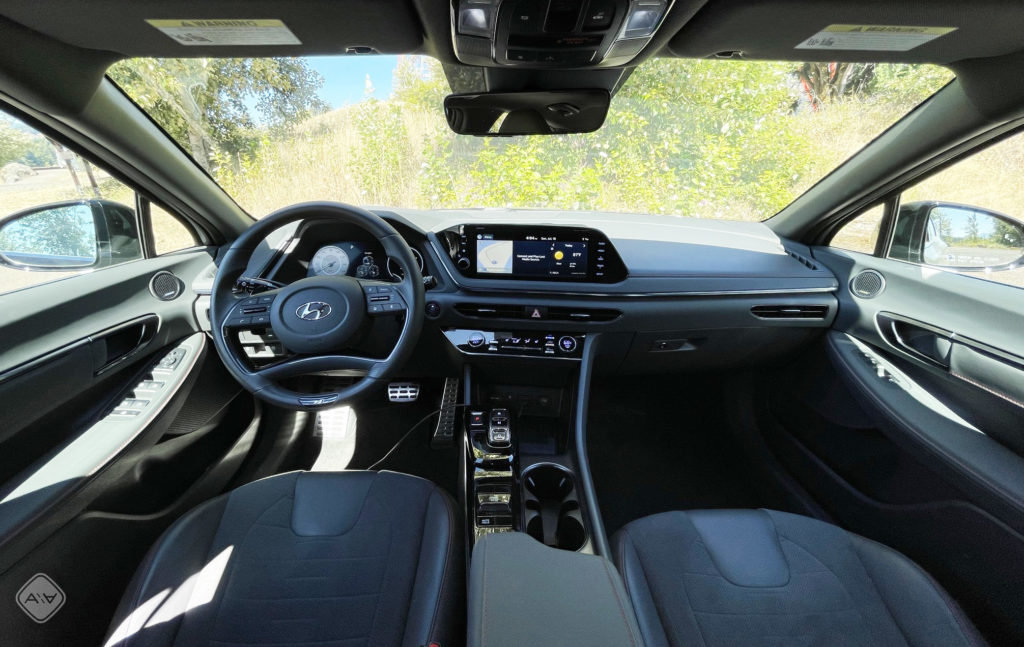 The driver’s seat proved comfortable on longer journeys, but you should know that the N Line’s more aggressive bolsters may be a problem for larger folks in front. The power 2-way lumbar support is a driver-side only feature and lacks the height-adjustable function you’ll find on a limited number of the competition. Rear seat legroom is excellent, but owing to the swoopy roofline headroom is somewhat limited compared to a Chrysler 300. At 16 cubic feet, the trunk is the biggest in the class.

Out On The Road

As crazy as the Sonata N Line seems so far, Hyundai decided to stop just short of calling it a Sonata N. The full-on N treatment would likely have cost too much. Want AWD? Shop somewhere else (Hyundai would love it if you bought a Genesis G70 AWD). Want luxury gadgets? Ditto. Instead, the engineering mission was to craft the sportiest “family sedan” possible without breaking the bank or giving up daily driving comfort. To that end, Hyundai firmed up the suspension and tweaked the steering, but it still rides well enough for your office commute or school run on America’s potholed urban jungle.

When the road straightens, you’ll discover why Hyundai has equipped most of the cars sent to the press with summer tires. This baby likes to burn. Rubber that is. With summer tires there’s a reasonable amount of front-wheel spin but the big sedan will still manage a 0-60 run of 5.1 seconds. 60-0 stopping? Just 108 feet. Those are numbers that would be impressive in a BMW 3-series a decade ago. What happens if you don’t get the summer tires? More spin than a 1980s DJ competition. The same drivetrain in the Kia K5 GT managed to smoke the tires all the way through first gear, squeal them all the way through second, and chip as third gear engages. The result? 5.4-5.5 seconds to 60 rather than 5.1. It’s all about grip. 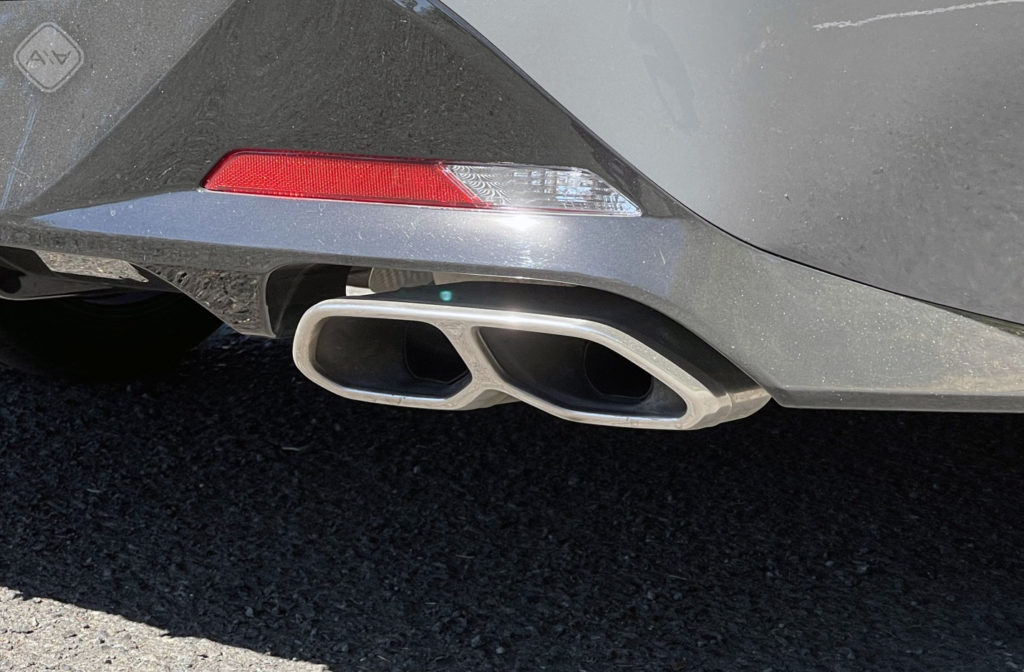 Thankfully Hyundai’s chassis engineers are some of the finest from Bavaria and they have managed to all but banish wheel hop and straight-line torque steer, but as always the laws of physics must be obeyed. Get a little too happy on the throttle in a corner and the front tires will break loose easily. With 311 lb-ft on tap and fairly little turbo lag, this is a hoot and a half to drive as long as you respect the limits.

Hyundai’s Sonata N Line is unlikely to convince too many crossover shoppers to return to a mid-size sedan, no matter how much more fun the Sonata is than the Santa Fe, but it will give sedan lovers a reason to stay. The N Line is crazy, pragmatic, and imminently loveable. The only thing it’s missing? The luxury features you can with the Limited trim. This really is an odd one, especially from a car company that has been working at making their lineup more luxurious and desirable over the years. I know that the rational reason is inventory control, but how hard would it be to offer an “everything package” that bundles the bits and bobs available in the Limited trim, or… The Kia K5 GT. Yep, you can get some of the forbidden content (but you have to give up factory summer tires) if you walk over to the Kia dealer and check out the Sonata’s close cousin.