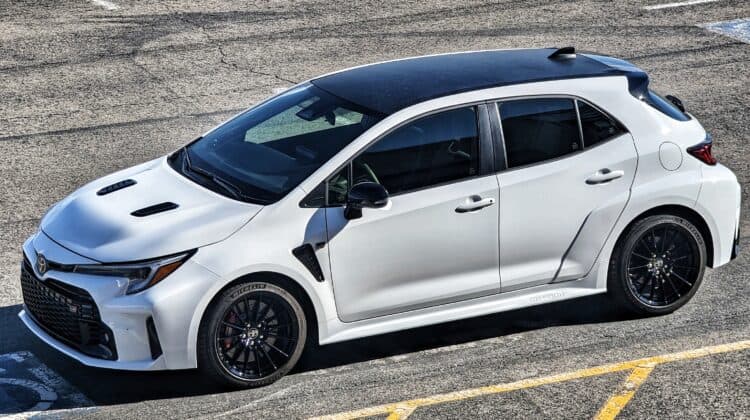 Let’s be honest, most of us associate Toyota with practical people movers like the Prius, RAV4, Sienna, and Highlander. Some folks might have fond memories of their 1990s Supra, or an MR2, but that’s not today’s Toyota. Or is it? Introducing the 2023 GR Corolla.

Akio Toyoda, the company’s current president, realized Toyota was lacking “soul” and he’s been on a decade long mission to change that. “Morizo,” as Akio is known in the racing community, was clearly tired of the Prius jokes and directed one of the biggest course corrections ever at Toyota: the creation of the GR sub-brand.

Gazoo Racing has been an evolution for sure, It started in 2009 as a preview of a small, lightweight, rear-wheel drive sports car that would eventually be known as the GR86, a joint venture with Subaru’s BRZ. Then came the resurrected GR Supra, co-developed with BMW. This begged the question: what’s next? A “coi-developed Golf R?” Not quite, the new GR is 100% Toyota, and yet the most un-Toyota thing on sale in America, the GR Corolla.

Toyota hasn’t been a player in the hot hatch segment in America since, well… ever. Nothing Toyota imported over the last 20 years could come close to vehicles like the Golf R, Civic Type R,  WRX, etc. Overseas, however, Toyota cooked up something truly mind-blowing: the Japanese market GR Yaris. As hot as the high-po Yaris may be, it’s just not quite right for America. It’s a little expensive, and, well, too little. Despite concerns that America would never get a hot hatch because of these realities, Akio pushed forward with the Yaris’ bigger brother: the GR Corolla. 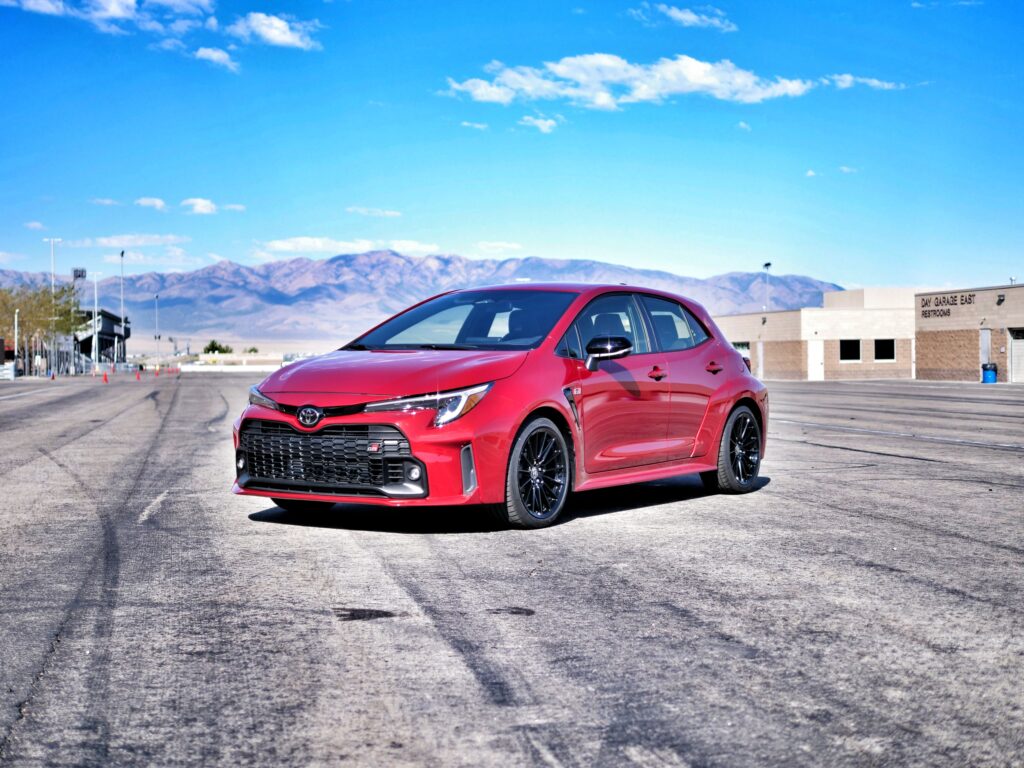 Toyota may own 20% of Subaru, and they may have cooperated on projects in the past, but the GR is 100% Toyota. That doesn’t mean that some of don’t see some STI parallels however. For those who haven’t been paying attention, Subaru’s new WRX is going to go to its grave as a sedan only and without an STI trim. Despite the conspiracy theories about whether or not Toyota had a hand in the STI’s demise, the GR Corolla is in many ways more true to the origins if the STI than the current WRX is.

Exterior Styling: Crazy, But Not As Crazy As Some…

The GR Corolla takes the Corolla Hatchback and turns it up to 11. Wide hips, fender flares, an optional carbon-fiber roof, aggressive wheels/tires, and a GR-themed squared-off front grille make this instantly recognizable as the fast one. You can’t get a sunroof, but that’s likely not a dealbreaker for most people (you can’t get one on the Hyundai Kona N either). The base Core grade and the 2023-only Circuit Edition ride on 235/40 Michelin Pilot Sport 4 tires, while the hard-core Morizo Edition rides on 245/40 Michelin Pilot Sport Cup 2. All wheel options are 18 inches in size with ventilated discs and four-piston GR-badged calipers up front, two-piston in the rear. All models have an aluminum hood and three exhaust tips with a unique configuration. One outlet sits in the center of the rear diffuser and has a pill shape to it, while the outer two have a circular shape.

The Circuit Edition adds a glossy finish to the black elements, functional air vents on the hood, and a unique carbon fiber roof treatment that reduces weight and lowers the center of gravity a bit. The Morizo Edition adds side rocker panels with “GR FOUR” embossed into the structure and unique matte black 10-spoke wheels. 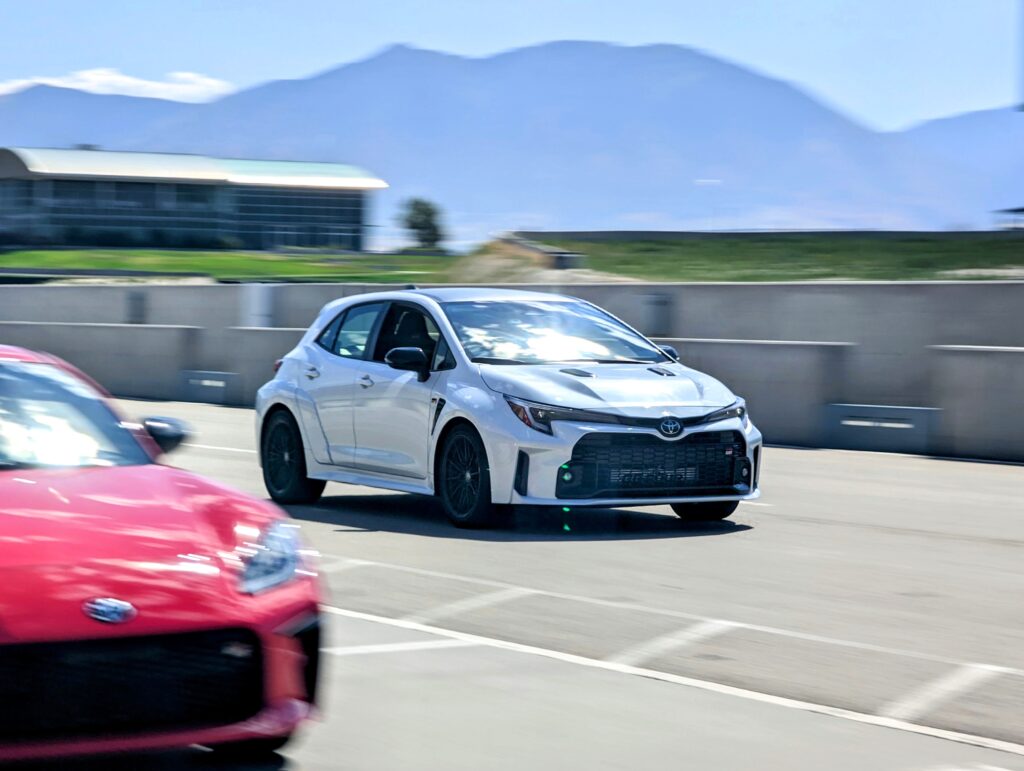 Inside, the GR Corolla doesn’t make too many drastic changes over a Corolla SE or XSE hatchback. The main differences are the steering wheel, the standard 12.3-inch digital instrument cluster, aggressive sport seats, and the GR badging all around. If you spring for the Morizo Edition, Toyota gets rid of the rear bench seat in order to save weight. A strut bar for rigidity replaces it and carries out cargo management duties on the side.

Unlike some other competitors, people around six feet tall will actually be able to wear a helmet in this thing. Alex was able to do so with no trouble, so keep that in mind if you intend on taking your GR Corolla to the track. This one will fit tall and short drivers alike both comfortably and snugly, with bolstering that isn’t intrusive but certainly holds you in place when flogging the car. The Core trim has leather seats with gray accents, while Circuit and Morizo receive red accents. The fancy instrument cluster is standard, but like in other recent Toyota applications, it is not the most immersive out there. Still, it keeps the Corolla relevant to Type R, GTI and Golf R shoppers. 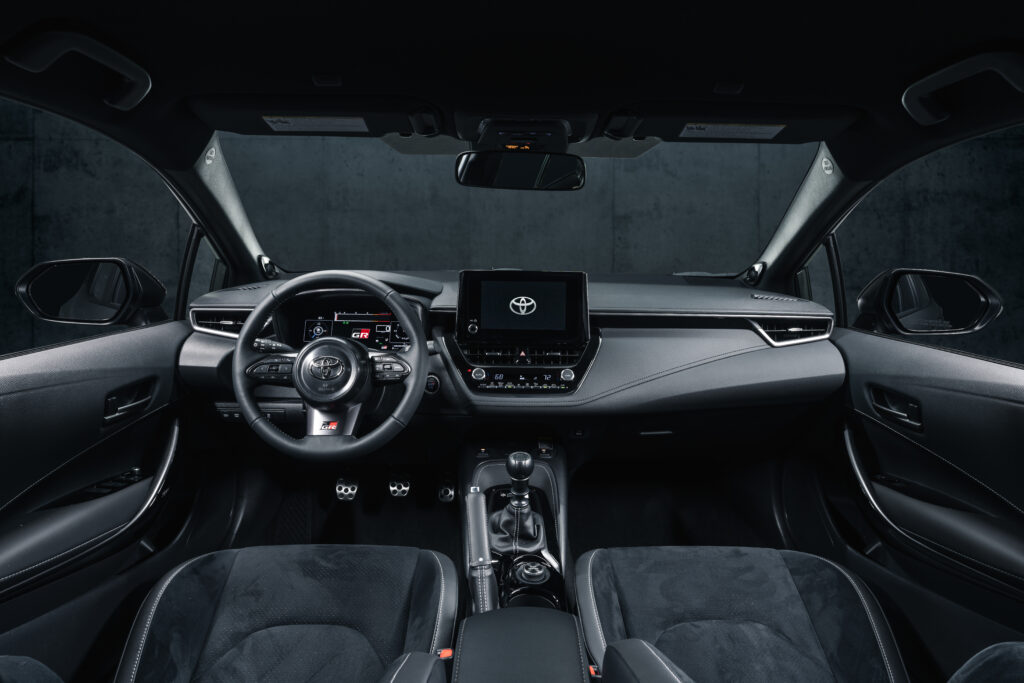 It shouldn’t be a surprise that the GR Corolla shares much of the drivetrain with the GR Yaris, what did come as a surprise is the power bump vs the sub-compact barn-burner. The G16E 3-cylinder turbo engine has been cranked up, way up, to 300 horsepower vs the 268 ponies it makes in the Yaris. That means the Corolla has 188 horsepower per liter, not too far off the insane AMG M139 engine at 208 horses per liter. Torque starts at 273 lb-ft from 3,000-5,500 RPM in the Core and Circuit trims thanks to peak turbo boost of 25.2 PSI. Step up to the Morizo and you get 26.3 PSI of boost to push torque up to 295 lb-ft from 3,250-4,600 RPM.

Like the GR Yaris, GR Corolla sends power to the ground via a six-speed manual transmission with Toyota’s iMT rev-matching and torque management technology. There are plenty of rumors that an 8-speed automatic might be available soon in the Japanese market GR Yaris, if Toyota decides to bring that stateside the GR Corolla would join the Hyundai and VW hot hatches in offering a two-pedal option for those that sit in stop and go traffic.

Why would Toyota go with a 3-cylinder and not the typical 4-cylinder like the rest of the competition? Let’s take a trip back in time and see Alex explain this logic…

According to Toyota, 0-60 MPH will take 4.99 seconds in the Core and Circuit Edition trims and 4.92 should you opt for the higher pressure Morizo. That puts it in line with the fastest Hyundai N products, but behind the Golf R slightly. Of course your 0-60 times will depend on how adept you are at dancing on the pedals… Unless you get one of the competition with a dual-clutch of course.

Unlike the upcoming 2023 Civic Type R, all GR Corollas will have a variable power split AWD system with optional limited slip differentials. Yep, plural. Bundles in the “Performance Package” on Core trims and standard for Circuit and Morizo Toyota packs a pair of Torsen limited slips: one for the front and one for the rear. If you’re looking to bomb down gravel roads or ice race, the GR’s for you.

The basis of the AWD system is more or less the same as the average Toyota AWD setup, power is split inside the transmission between the front differential and the prop shaft to the rear. Between the transmission and rear differential, Toyota inserts a beefy clutch pack that allows more power to be sent to the rear than any other Toyota transverse drivetrain currently on sale. Then they do something interesting: they overdrive the rear axle by 0.7%. Why? Because this is the key trick to getting a rear power bias in a vehicle with this kind of drivetrain design. Sound familiar? It’s the sae trick Honda uses in the iVTM4 and SH-AWD systems, only Toyota appears to have designed this system to handle more power for longer.

When you start the car the system defaults to a 60:40 front:rear power split and at the flick of a knob you can engage 50:50 or 30:70. Toyota calls the 50:50 mode “Track” but we found the 30:70 mode more fun. Despite the always-on trick AWD system the fuel economy comes in at a reasonable 24 MPG combined.

The Drive: A New Kind Of Bonkers. For Toyota That Is.

With the dial for the GR-Four system staring us in the face, the first thing we did was test out each of the three modes. First up. 60:40. The always-on nature of the AWD system means that even hard launches are drama free regardless of the surface, but as with many AWD turbocharged cars, bog is the enemy of a swift 0-60 time. Because the front tires can’t break loose, like in a Type R, getting the most out of the 1.6L turbo requires more skill in matching the revs, the clutch release, and the throttle-romp. Get the GR Corolla in a corner under power and the front power bias makes it behave much like the Subaru WRX.

50:50 is the mode Toyota says is designed for track duty. Disclaimer: we were not allowed to flog the GR Corolla lap-after-lap so we have no idea if the AWD and engine cooling systems are suitable for an endurance race or not. The mission of the 50:50 mode is balance, and it works surprisingly well, something no doubt aided by the GR Corolla’s suspension and chassis design. In neutral handling (power off), there is still a hint of understeer but that can easily be resolved with a hint of throttle. This isn’t the kind of hatch you can steer with your right foot, but it is the kind of car that goes exactly where you point it.

30:70 is clearly the best mode. Although the clutch pack will still respond to various traction realities, in the 30:70 power split mode it spends almost the entire time in full lock. This likely results in lower temperatures for improved durability but you’ll have to wait for more detailed testing to be sure. The rear biased power mode is unique in this segment. The WRX’s power split is 50:50 with the manual and 45:55 maximum with the CVT and the Golf R tops out at 50:50 (assuming no front wheel slip). The difference on an autocross is clear: the Corolla is miles more fun. The Corolla still won’t quite right-foot steer, but the rear end will certainly hang out in a way you’d never think a Corolla could, or should. Want to drift? Don’t worry, there’s a mode for that too. The Golf R may have German precision, but the GR Corolla is the automotive equivalent of a high-achiever on Adderall. 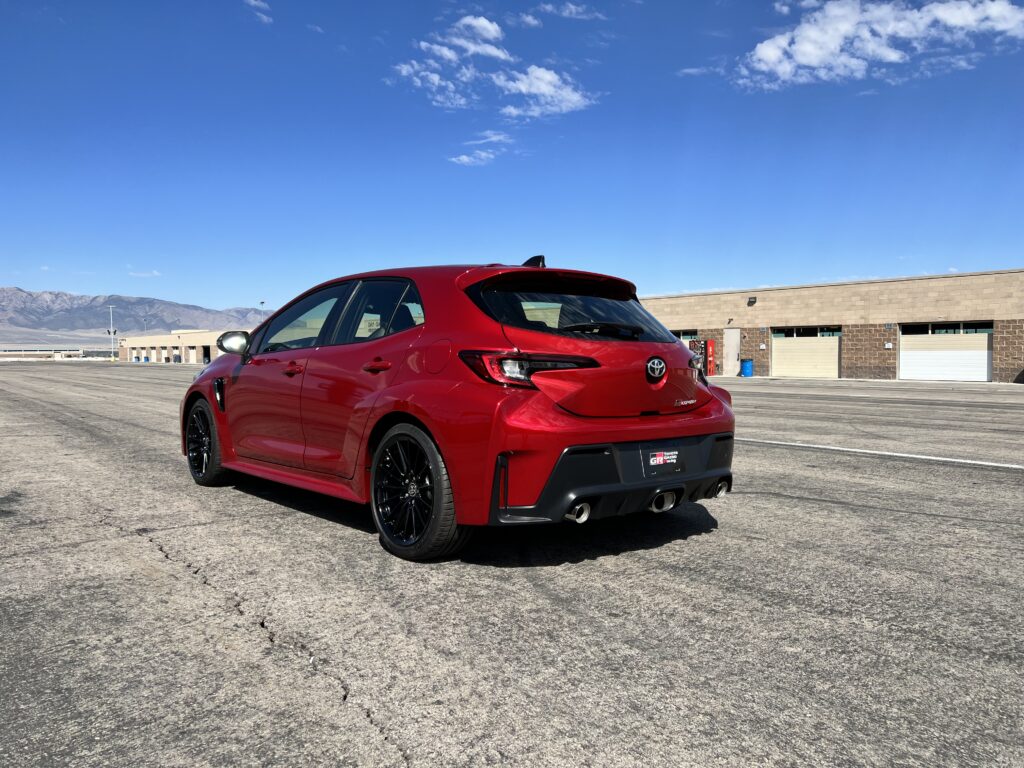 Yeah, But How Much Does It Cost?

Luckily for fans of this car, Toyota has priced it relatively aggressively. It starts at $35,900 for the Core grade, while the 2023-only Circuit Edition will cost reservation-holders $42,900, pushing into WRX GT and Golf R territory. The hard-core Morizo Edition is meant for those who have the wherewithal to actually take their GR Corolla to a track. It will set you back at least $49,900 and receives a boost in torque over the other models while reducing weight thanks to the removal of the rear seats, rear speakers, rear window regulators, and rear windshield wiper apparatus.

Toyota didn’t mess around when developing its first serious hot-hatch for North America. Heck, they weren’t playing when they made the GR Yaris either, and while it would be cool to get that two-door hatchback option here, the GR Corolla successfully caters to a wider audience of enthusiasts. Get one while and if you can, as it will go down in history as one of the greatest Toyotas ever built. And it didn’t take a partnership to make it happen!

More info on the 2023 Toyota GR Corolla can be found here.