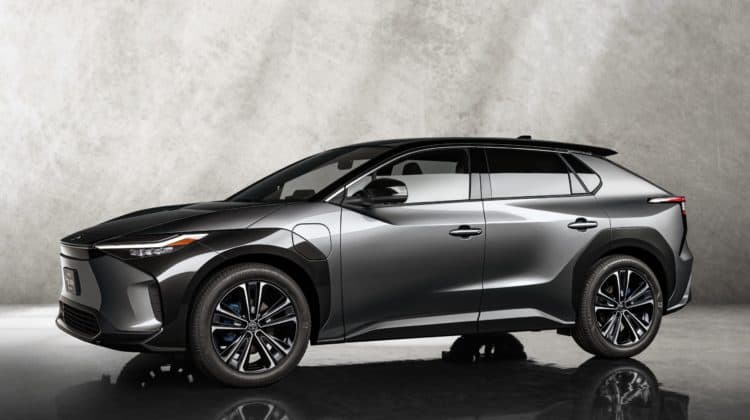 The Toyota bZ4X Concept has landed on U.S. shores and it previews the brand’s first production battery-electric vehicle. Co-developed with Subaru, the final iteration of the bZ4X will use the e-TNGA platform, which has been developed specifically for EVs. It will be the first vehicle on that architecture followed by the Subaru Solterra, its mechanical sibling.

Look closely at the Toyota bZ4X Concept and you’ll see a lot of familiar design cues from the automaker’s current lineup. From the side, the bZ4X gives off a RAV4 vibe, only this time it has a low-slung roofline to help improve its ability to cheat the wind. The charging port is on the driver’s side front fender and houses both the AC and DC charging connectors.

Unlike the similarly sized RAV4, the bZ4X is lower to the ground to keep its center of gravity down and maximize aerodynamics. As with most EVs, the bZ4X doesn’t have a grille; the only opening for cooling is a small one in the lower part of the front fascia. You also get thin LED headlights adding to the crossover’s familiar looks. The rear continues the same angular theme with a slanted rear window for maximum aerodynamics and a full-width LED light strip.

Move inside and you’ll immediately notice that the Toyota bZ4X Concept is extremely close to production. The interior layout is new but nothing about it screams concept car. Everything from the steering wheel to the buttons and displays is ready for production. Even the air vents, door cards, door handles and the center console look conventional instead of overly stylized pieces meant for show cars. You also get a larger storage area under the center console similar to what you find in the Toyota Sienna minivan. Eco-friendly materials and upholstery should be included too since every new long-range EV has embraced those over traditional leather.

In terms of tech, the bZ4X appears to be getting the same multimedia layout as the Venza. That means it gets Toyota’s latest infotainment system with a 7.0-inch instrument cluster in front of the driver and a large widescreen display on the center stack. The latter appears to be running new software, which we’re hoping is better than the existing version.

We’re expecting Toyota to offer single- and dual-motor configurations. Unfortunately, we don’t know how much power it’ll make or the battery sizes it will eventually offer. Toyota did reveal that the production version will debut later this year before going on sale in 2022.

The production version of the Toyota bZ4X Concept will be the first full EV from the largest automaker in the world. It will be part of a larger global offensive that aims to introduce 70 electrified vehicles by 2025 and 15 of those are EVs. This also forms part of Toyota’s commitment to be carbon neutral by 2050. When it goes on sale next year, the Toyota bZ4X will be part of the bZ subbrand, which stands for Beyond Zero. Following the bZ4X will be five other vehicles underpinned by the e-TNGA platform including a midsize sedan but they’re not all expected to come to the U.S. market.