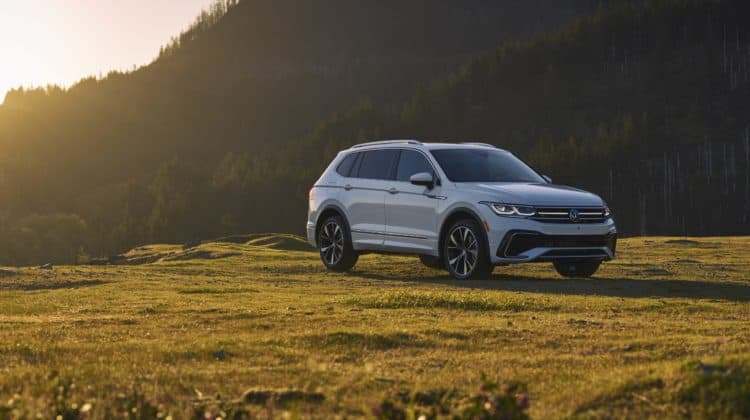 This week saw several important news items but we’ve also got some forbidden fruit for you wagon lovers out there.

News from Germany kicks off with the reveal of the 2022 Volkswagen Tiguan. The brand’s most popular model gets a significant refresh sporting a heavily revised front fascia complete with a new grille and reshaped headlights. Volkswagen’s IQ Drive suite of driver assistance features will be standard from the second trim and up. The 2.0-lite turbo-four with 184 hp and 221 lb-ft of torque carries over unchanged and remains paired to an eight-speed automatic transmission.

Porsche has started testing the next-generation Macan EV, which it claims will be the sportiest model in its lineup. The brand also claims that the Macan EV, which will be the first Porsche on the Volkswagen Group’s PPE platform, is going to have more range than the Taycan. The current generation internal combustion Macan will see another refresh this year and will be sold alongside the Macan EV.

Mini has announced that the Convertible variant will go electric for its next generation. Scheduled to arrive in 2025, the next Mini Convertible coincides with the brand’s move to become an all-electric brand by the 2030s. Mini will introduce its last gas engine in 2023, the same year that the next-generation Countryman will also debut.

Out of Detroit, Ford has officially announced that the all-electric F-150 will be called the F-150 Lightning in a teaser. The last time Ford used the Lightning name was from 1992 to 1997. It was the precursor to all the hot F-150s, sporting a 5.8-liter V8 with 240 hp and 340 lb-ft. Obviously, the next F-150 Lightning, which is a battery-electric truck, will get much, much more than that.

Our friends at TFLCar got a spy video of the next-generation Mazda CX-5, which will likely be renamed to the CX-50, testing in Los Angeles. From what we can tell, this prototype appears to be wearing at least 20-inch wheels and is more upright than the current CX-5. The black and white stickers also suggest that development is well into the late stages as the crossover is now using its production body. Its front end appears to be an evolution of the current car’s corporate face too. The CX-5/CX-50 may also be the first vehicle to ride on Mazda’s rear-drive-based large car platform. Fun Easter egg: At 3:48, you get to see the engineer behind the wheel is none other than Dave Coleman himself.

News from Asian automakers continues with Subaru announcing its first all-electric crossover and it’s called the Solterra. Sized similarly to the Forester, the Subaru Solterra is being co-developed with Toyota and will be the sibling to the production version of the bZ4X Concept. It will ride on the e-Subaru Global Platform, which is likely a variant of Toyota’s e-TNGA architecture.

Speaking of Toyota, it has announced that it expects 70 percent of vehicles it sells will be electrified by 2030. About 30 percent of that number will consist of EVs and hydrogen fuel cell vehicles. On a global scale, Toyota and Lexus expect to sell over 8 million electrified vehicles with 2 million of them being EVs and FCVs. Toyota will offer a solution based on the region’s access to EV infrastructure, giving every consumer a way to experience electrified motoring.

Nissan has made buying a 2021 Leaf more enticing by giving you a $350 credit on Turo. This comes after Nissan and Turo did a six-month pilot program with dealers in Denver, Phoenix, and Washington D.C. This allows new Leaf owners to book a car from Turo in case they need a different car for a specific task.

Hyundai will reveal the U.S.-spec Ioniq 5 in a virtual reveal on May 24th. The car promises up to 300 miles of range. Expect to learn more about what the Ioniq 5 will offer for the U.S. market.

Hyundai Motor Group also made even bigger news when it announced that it will invest $7.4 billion by 2025 in the U.S. to prepare its manufacturing facilities for EV production. Hyundai and Kia aim to start making EVs by next year at their respective assembly plants in Georgia and Alabama. The Korean automotive conglomerate is also doubling down on fuel cell technology and will be working with Cummins plus several local partners to expand infrastructure and its powertrain applications to commercial vehicles.

Genesis, on the other hand, unveiled the G70 Shooting Brake and it appears this attractive new wagon will only be for European consumers. We’re guessing the powertrains will mirror that of the sedan, which means a base 2.0-liter turbo-four and an available diesel engine or a gas 3.3-liter twin-turbo V6.

The EPA has released the official range estimates for the 2022 Chevrolet Bolt EUV. At 247 miles, it’s 3 miles lower than GM’s original estimate and 12 miles less than the Bolt EV. However, the Bolt EUV still has more range than the Kia Niro EV, Nissan Leaf, and several other EVs with larger or similarly sized batteries.

EPA fuel economy estimates for the 2022 Nissan Pathfinder have also been published and the surprise is the FWD model isn’t the most efficient. AWD-equipped examples are rated at 21/27/23 mpg city/highway/combined while FWD ones are good for 21/26/23 mpg. The Platinum trim with AWD is the least efficient at 20/25/22 mpg. Outside of hybrids, only the Mazda CX-9, Ford Explorer with the 2.3-liter turbo-four, and Toyota Highlander V6 are slightly more efficient than the Pathfinder. Production of the 2022 Pathfinder also started at Nissan’s Smyrna, Tennessee facility and will go on sale this summer.