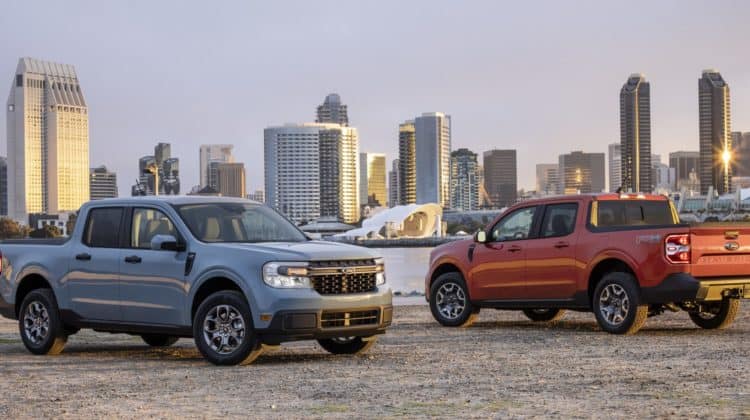 The highlights in this week’s news cycle are all about crossovers, crossovers, and more crossovers thanks to several updated or new generation models. We’ve also got some forbidden fruit, a new compact truck, and finally, some news regarding a legendary sports car from Japan.

Kicking things off during this week’s news cycle is the 2023 Kia Sportage. The new generation crossover sports a completely new look that’s distinctive yet imposing. Inside, the car gets a massive curved display that likely houses two screens. Expect the powertrain lineup to mirror the Hyundai Tucson’s with electrified powertrains at the top. However, Kia could change things and use the 1.6-liter turbo-four as the Sportage’s base engine in North America instead of the naturally aspirated 2.5-liter.

Quite possibly the biggest piece of news this week is the 2022 Ford Maverick. This compact truck rounds out the Blue Oval’s lineup, which now has something for everyone. The best part? A hybrid powertrain is standard and starts at $19,995 before the $1,495 destination charge. If you need AWD, you must opt for the available 2.0-liter turbo-four. The Maverick’s maximum towing capacity of 4,000 pounds also requires that engine and the 4K Tow package.

BMW dropped a lot of news this week with the arrival of the refreshed X3 and X4. The former’s plug-in hybrid powertrain appears to have been discontinued for North America, leaving only the 30i and M40i models. Pricing for the X3 and X4 starts at $43,700 and $51,800 respectively before the $995 destination charge. The high-performance X3 M and X4 M are also available starting at $69,900 and $73,400 respectively before the $995 destination charge gets added. Higher-powered Competition versions have also returned. Production begins in August for both models before going on sale the month after.

The BMW 4 Series adds a more practical body style in the form of the 4 Series Gran Coupe. Think of this as a svelte four-door hatchback just like its predecessor. It’ll be available initially in 430i and M440i xDrive flavors starting at $44,800 and $58,000 respectively before adding the $995 destination charge. The 2022 4 Series Gran Coupe is 5.9 inches longer, an inch wider, and 2.1 inches taller than its predecessor. Its wheelbase has also grown by 1.8 inches and its coefficient of drag is now 0.28 or 0.01 lower than before.

Audi has announced pricing for the 2022 A3 sedan family. The base model, which will be available in FWD or AWD, uses a 2.0-liter turbo-four with 201 hp and 236 lb-ft of torque. The more powerful S3 utilizes the same engine tuned for 306 hp and 295 lb-ft, allowing it to hit 60 mph in 4.5 seconds. Both cars use a seven-speed dual-clutch automatic. The S3 gets more performance goods including a lowered sports suspension, optional adaptive dampers, and larger front brakes. The A3, on the other hand, uses a 48-volt mild hybrid system to improve fuel economy and provide torque fill in areas of the powerband where the engine isn’t making much power.

The refreshed 2022 Jaguar I-Pace has been revealed with meaningful updates. An 11 kW onboard AC charger is now standard and a new infotainment system called Pivi Pro has been added. Jaguar will only offer the I-Pace in HSE grade, which starts at $69,900 before the $1,150 destination charge. As a result, you get more standard equipment including a Meridian 3D audio system, a surround-view camera, and over-the-air update capability.

Honda teased the 2022 Civic hatchback, which will be the second body style for the 11th generation lineup. It’s likely the only way to get a manual transmission without going to a Civic Si or Type R.

Nissan finally revealed when the 2022 Z will make its first appearance. Mark your calendars because the next generation of the legendary sports car will make its global debut on August 17 in New York City as part of the Nissan NEXT product rollout plan.

Pricing for the 2022 Nissan Pathfinder has been announced at $33,410 before the $1,150 destination fee. AWD adds between $1,900 to $2,790 to the sticker price depending on the trim. A loaded Pathfinder Platinum model with AWD will set you back around $49,000 including destination.

Subaru is expanding its Onyx Edition nameplate to the Ascent. A teaser showing off the badge on the brand’s largest SUV was recently shown off on Facebook.

The next-generation Toyota Land Cruiser has been unveiled but Americans won’t get a taste of it because it’s not coming here. It’s the first model to ride on Toyota’s TNGA-F architecture, which was built specifically for body-on-frame vehicles. Under the hood is a 3.5-liter twin-turbo V6 with 409 hp and 479 lb-ft. A 3.3-liter turbodiesel V6 is also available and makes 305 hp and 516 lb-ft. The gas engine is paired with a 10-speed automatic transmission. Expect that twin-turbo V6 to end up in the next-generation Lexus LX, the Land Cruiser’s more upscale sibling.

Lexus has officially revealed the 2022 NX. You’ll have four powertrains to choose from including the NX 450h+, Lexus’ first plug-in hybrid, which shares its propulsion system with the Toyota RAV4 Prime. The second-generation NX sports an evolutionary look but inside it gets a new driver-oriented layout and the new Lexus Interface with an optional 14.0-inch touchscreen. All versions except for the base NX 250 get AWD.