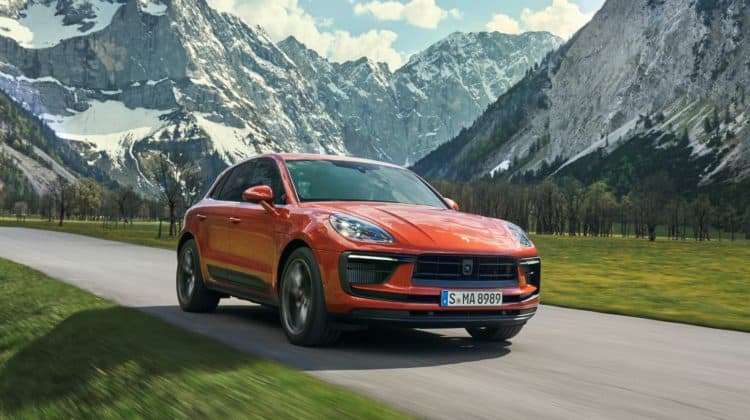 This week’s latest news mainly comes from Europe where several automakers have revealed their electrification plans and latest products.

Porsche has revealed the 2022 Macan, which is the last refresh before the all-electric second generation arrives. Every model gets a power boost except for the Turbo, which has been discontinued. Like the outgoing model, Porsche’s smallest crossover starts with a 2.0-liter turbo-four, which now makes 261 hp and 295 lb-ft of torque, an increase of 13 hp and 22 lb-ft. The Macan S still uses a 2.9-liter twin-turbo V6 but it’s now rated at 375 hp and 383 lb-ft. With the discontinuation of the Turbo model, the Macan GTS is now the new range-topper and uses the same V6 as the S but updated to 434 hp and 406 lb-ft. Every Macan gets AWD and a seven-speed dual-clutch automatic transmission as standard. The Macan GTS will also be offered with a Sport package that includes the Sport Chrono package, black side mirror covers, 21-inch alloy wheels, carbon-fiber interior trim, and Race-Tex upholstery. Pricing starts at $54,900 for the base Macan, $65,400 for the Macan S, and $79,900 for the Macan GTS.

Volkswagen has officially announced the discontinuation of the Passat with 2022 being its last model year. To commemorate the end of production for the sedan in the U.S., Volkswagen will release a Limited Edition model but production is capped at 1,973 units. It’ll be available in Aurora Red Metallic, Racing Green Metallic, Platinum Grey Metallic, and Pure White. Aurora Red and Platinum Grey will come with a black interior while Racing Green and Pure White get a two-tone black and Mauro Brown combination. The split for colors are as follows: 411 in Aurora Red, 423 in Racing Green, 524 in Pure White, and 615 in Platinum Grey. Limited Edition Passats will be distinguished with black side mirror covers, 15-spoke 18-inch alloy wheels, adaptive LED headlights, special floor mats, unique tags with the car’s build number, leather upholstery, heated front, and rear seats, a Fender audio system, built-in navigation, and parking sensors. Pricing for the 2022 Volkswagen Passat Limited Edition starts at $30,295.

Volvo has announced pricing for the 2022 C40 Recharge and it starts at $58,750. The XC40’s coupe-like sibling will be offered strictly in a single fully-loaded trim and four of its seven exterior colors will be available with the blue carpet. Every 2022 C40 and XC40 Recharge will get 250 kW of free charging at Electrify America stations for three years. Unlike other vehicles, you have to order your C40 online and reservations started back in March.

Audi has revealed the RS 3, which will be available only as a sedan in the U.S. As with the previous model, the new RS 3 gets a 2.5-liter turbocharged five-cylinder engine that’s good for 401 hp, allowing it to spring to 60 mph in under 3.8 seconds. It’s also the first Audi RS model to get the RS torque splitter, which allows for better torque distribution on the rear axle and reduces understeer during spirited drives. The RS Torque Rear drive mode is essentially the drift mode in the RS 3, allowing it to easily go sideways. Other go-fast goodies include a standard RS sport suspension, adaptive dampers, larger wheel camber, and six-piston steel or carbon-ceramic brakes. As before, the only transmission available is a seven-speed dual-clutch automatic. Audi says the RS 3 will go on sale in early 2022.

Mercedes-Benz has announced the S 580e for the European market. This is the plug-in hybrid variant of the flagship sedan, which uses a 3.0-liter turbocharged inline-six coupled to an electric motor, a nine-speed automatic, and a lithium-ion battery for a combined output of 516 hp and 553 lb-ft. In the previous iterations of the S-Class, that’s AMG territory. In fact, the S 580e will be the most powerful S-Class in North America when it arrives but it will eventually be surpassed by the upcoming AMG variants. It will also be capable of DC charging its battery to 100 percent in 30 minutes and be able to travel 62 miles in EV mode on the WLTP cycle.

Mercedes-Benz also confirmed this week that it will reveal the EQE SUV and EQS SUV next year. The latter will also get a Maybach variant. Before the end of 2021, the EQE sedan will debut as a competitor to the Tesla Model S and it will likely be followed by AMG variants. However, expect the EQE models to use a smaller battery instead of the 107.8-kWh unit in the EQS sedan. Additionally, Mercedes announced that in 2024, the next-generation G-Class will arrive as a battery-electric model. In 2025 it will also release three dedicated EV platforms: MB.EA for midsize and large vehicles, AMG.EA for performance models, and VAN.EA for vans and light commercial vehicles.

The 2023 Chevrolet Corvette Z06 has been teased ahead of its debut later this year. Based on the teaser video, the hotter Corvette will use a flat-plane crank V8, meaning it could be a high-revving screamer instead of a supercharged bruiser. Expect this to have significantly more power than the standard Stingray.

Subaru has revealed pricing for the 2022 BRZ. At $27,995 for a base model with the six-speed manual, the BRZ is a great buy. The available six-speed automatic transmission increases the starting price to $29,595. The range-topping Limited grade is still fairly affordable at $30,495 with the stick or $32,295 with the auto. Extra features included in the Limited trim include matte gray 18-inch alloy wheels, Michelin Pilot Sport 4 summer tires, blind-spot monitoring, lane-keeping assist, rear cross-traffic alert, and adaptive LED headlights.