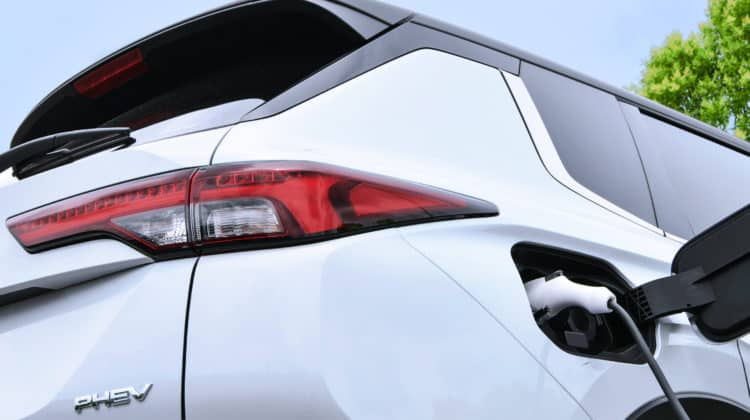 Most of this week’s news comes from Japan where a new generation of an iconic sports sedan has been teased again along with a plug-in hybrid crossover.

Out of Germany. and the U.S, we have more news of electrified models as two giants push for a fully electrified future.

The 2022 Subaru WRX has been teased once more kicking up dust. We get some more glimpses of the newest iteration of the rally-bred sports sedan and it appears it’s getting contrasting fender flares and a new orange paint that’s sure to turn heads.

Mitsubishi announced that the next Outlander PHEV will debut later this year and arrive in the U.S during the second half of 2022. One of the two teaser shots shows the crossover charging with a level 2 AC charger but there’s no word on whether DC charging will return. If it does, it’ll likely be a CCS combo plug instead of the old CHAdeMO standard. Mitsubishi says that the Outlander PHEV will get a bigger battery and a more powerful engine, which should make it the most potent and efficient version of the crossover. EV mode range should also be longer than before. The new platform also means the Outlander PHEV will be a seven-seater, which likely indicates that the battery is under the passenger compartment.

Hyundai has announced that the 2022 Elantra N will make its North American debut at the 2021 New York auto show. Like the Kona N, the Elantra N will use a 2.0-liter turbo-four with 276 hp and 289 lb-ft of torque. However, you get two transmission choices in the Elantra N: a standard six-speed manual or an eight-speed dual-clutch automatic. You’ll also find all the usual go-fast N goods like adaptive suspension, a limited-slip differential, sticky tires, 19-inch alloy wheels, and an active exhaust.

Mercedes-Benz has teased a wide range of new vehicles it intends to show at the 2021 Munich auto show. The most important one is the EQE sedan, which is a direct competitor to the Tesla Model S. It will ride on Mercedes’ new EVA platform, which is specifically for battery-electric vehicles, and first appeared on the larger EQS sedan. Mercedes’ MBUX Hyperscreen will also be in the EQE. Other notable debuts include a Maybach concept car and two AMG models, the first all-electric and hybrid vehicle from the brand’s performance division. We suspect the latter is the AMG GT 73 Four-Door Coupe, which is rumored to have over 800 hp and 737 lb-ft on tap.

A report from Automotive News recently emerged that by 2025 the Chevrolet Camaro will be replaced by an all-electric successor. The big shocker there is that it will be a sedan. The same year, the current Malibu will also end its production run so we think that General Motors is trying to replace two cars with one. If that’s the case, GM needs to offer a broad range of variants ranging from more consumer-oriented ones to high-performance flavors that can fulfill the void left by the Camaro SS and ZL1. This could also be the spiritual successor to the Chevrolet SS, a V8-powered sports sedan that was essentially a rebadged Holden Commodore. Around the same time that the Camaro’s successor arrives, a performance crossover will also join the Chevrolet lineup.