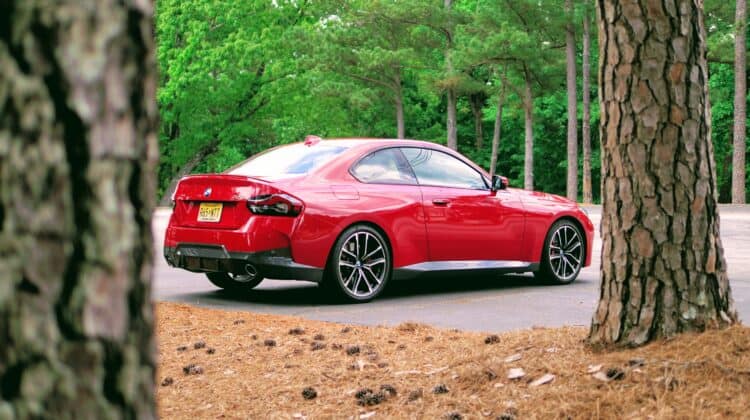 The 2022 BMW 2 Series lineup consists of two body styles: a two-door and a four-door. Yes, a convertible was available on the previous generation, but BMW has made no indication that the drop-top variant will make a return for this new G42 generation. Nevertheless, you can trace the two-door’s roots in the U.S. back to the 1 Series that went on sale here in October 2007. That model was ultimately replaced by the larger and more dynamic 2 Series in 2014, though the 1 continues to be sold in other markets (including…..Mexico!). The four door 228i and M235i models were introduced in 2019, and while they start with the letter 2, they couldn’t be more different from the original car’s formula. They are based on the front-wheel-drive UKL2 platform that also underpins the X1 and Mini products. This review, however, is about the 230i. Two doors, a turbocharged 4-cylinder, rear-wheel-drive, and a back-to-basics BMW driving experience that stands out in a sea of oversized and over-engineered products from the Bavarian automaker. Let’s see what BMW’s least expensive model is all about…

Like the 1 Series Coupe it replaced, even in its second generation the 2 Series Coupe adheres to the same upright and burly proportions that made it stand out from other two-doors on the market. Even compared to BMW’s other coupes (4 and 8), this is not nearly as sleek or svelte in its profile. That doesn’t mean it looks bad, though. I actually love the way it looks, and head room benefits from the shape in both rows (despite those figures shrinking slightly compared to generation one). Where the design becomes more controversial for most people is in the details, where the devil likes to live, apparently.

I am a huge fan of the front end design on this red M Sport package with its large triangular side vents and traditional BMW kidney grille shape. There are active aero shutters in there that open and close to help more efficiently cool the engine within. It’s a sharp look that doesn’t offend me in any way, which is not something I can say of some of the brand’s recent new offerings. The doors utilize BMW’s new handle design that doesn’t physically move when you pull on it. It is sleek and works well with my hands, so no complaints there.

The rear end is the most polarizing yet, still, I am one of its fans. The taillights have a modern LED signature that is reminiscent of a shikane. The duckbill spoiler is supplemented by a tiny body-colored lip spoiler that should be black or carbon fiber, in my opinion. The lower diffuser is somewhat aggressive and nicely integrates the substantial dual exhaust tips. Overall, it is a fresh take on the familiar 1/2 Series look.

The interior is a carbon copy of the pre-refreshed (2022) 3/4 Series interior. If you like that design, this one will please you. However, it will be adopting the updated curved dual-LCD setup from the iX and refreshed 3 Series very soon. If you prefer that look, you’ll need to wait a little bit longer for that update. As it currently stands, a full LCD instrument cluster is present and accounted for, though it is not very customizable.

The infotainment system runs iDrive 7, which works well via the controller on the second console as well as the touchscreen itself. It has wireless Apple CarPlay and Android Auto which seamlessly connect automatically each time you return to the car. There are M lap timers and G-force meters for those of you who want to flog your 230i, and built-in Park Mobile for those of you who frequently use that program to pay to park. I have not had the chance to try out iDrive 8, but that will come to the 2 Series with the aforementioned refresh.

There is a good bit of piano black plastic around the center console, but the materials throughout the cabin feel high quality. Even though it is the entry point into the brand, you can still feel the sophistication of the manufacturing process that makes a BMW interior feel its price point. Unlike the previous generation, this interior feels appropriate for its price tag. The only thing that is lacking is rear seat leg room. You can get around the head room limitations, which are minimal compared to other coupes, but taller people will find it nearly impossible to get comfy back there. The front passenger seat also takes awhile to power-slide forward for ingress and egress.

Under the hood of every 230i is the B48 ‘TwinPower’ turbo 4-cylinder putting out 255 horsepower and 294 lb.-ft. of torque, mated to a ZF 8-speed automatic and rear-wheel drive. There’s no more manual transmission on offer and no all-wheel drive either, for now. The M240i has 382 horsepower and is AWD-only. Since the 3/4 Series offers both of these engines with both rear- or all-wheel, there is still hope that BMW will bring those options to this model lineup. For now, if you want rear-wheel drive, you have to stick with the smaller engine. 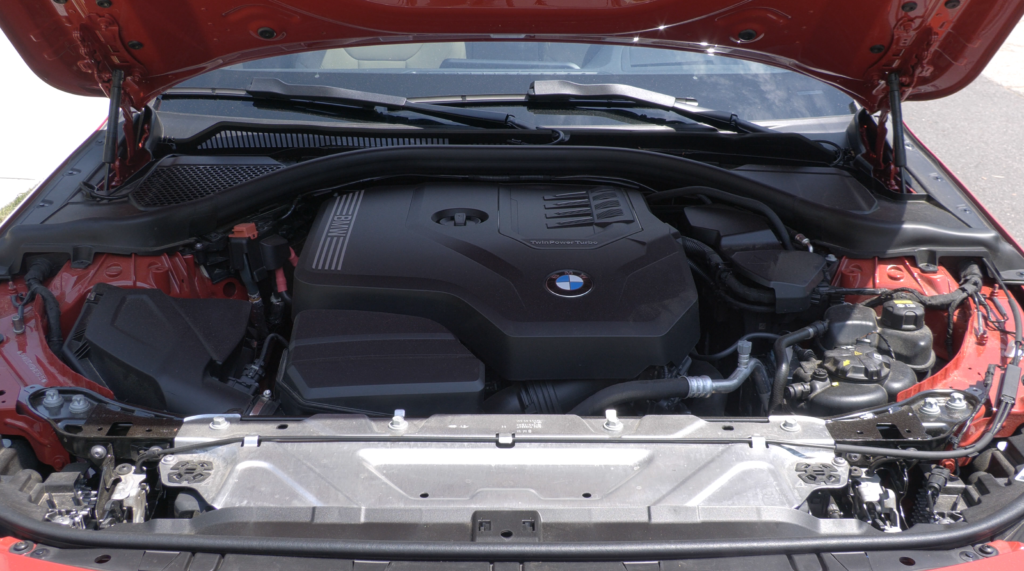 Based on the driving experience alone, the 230i comes off as an excellent entry level model for BMW. With the M Sport package I have on this one, it looks and feels like the more powerful M240i. If you’re willing to give up 100 or so horsepower and all-wheel drive, this experience will still satisfy you. Like with the 3/4 Series that it can also be equipped with, acceleration to 60 mph takes 5.5 seconds, according to BMW. Unfortunately, I did not have the equipment on me to verify that for myself, but as Alex said in his first drive review (and as is typical of modern BMW motors), that number can probably be rounded down to the nearest whole number in real-world driving.

The standard eight-speed automatic is quick shifting but does tend to suffer from inconsistent activation depending on what speed you’re going. When you hit the accelerator pedal, the combination of a little bit of turbo lag and a reluctancy to quickly downshift means you’re sometimes put in awkward situations where the power just doesn’t get to the ground quite as soon as you need it to. Once you’re at speed, the transmission does do a better job of being more responsive. If you’re attempting a hard acceleration, that’s when the shifts are really sharp and sporty. However, lift off the throttle and you’ll experience a lot of lurching. This is the kind of car where your passengers’ heads will serve as a very clear barometer of how well you’re controlling the throttle. It is somewhat like a manual transmission in how lurchy it is. 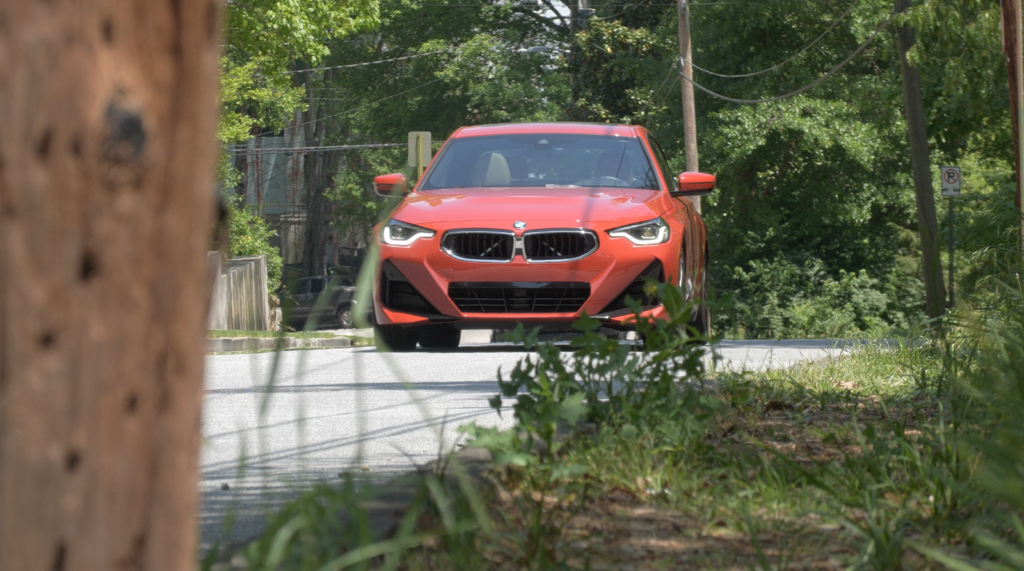 This 230i had the Dynamic Handling package with M Sport brakes from the M240i. While they are powerful, there’s a little bit of vagueness and sponginess to the spring action of the pedal. Once they do bite down, it becomes a little bit difficult to modulate them around town. It’s not exactly the smoothest stop-and-go ordeal. They’re much more suitable for spirited canyon carving which is where you’re going to actually need your dancing feet.

Driving dynamics are very balanced out on the open road. There’s not a lot of nose diving or bottoming out over deep undulations in the pavement, but there is a noticeable amount of body roll in the curves. If you want a more buttoned down experience, there are other options in the 2 Series lineup. With the added length for this generation came an increased wheelbase, so it feels very stable out on the highway. The way it drives feels very appropriate and nimble around town, considering the mission of this car. The M Sport differential out back sends the appropriate amount of torque to either right or left wheel and does a very good job working with the Pirelli P-Zero tires to keep the car hooked to the ground. The steering feel is just fine, but it doesn’t really wow or disappoint me. It is a variable ratio setup, so at parking lot speeds it’s easy to maneuver. At higher speeds, it gets a bit sportier, though its sportiest setting  is never too heavy. Feedback from the road is certainly there, though, but not in spades like a full-on M car. 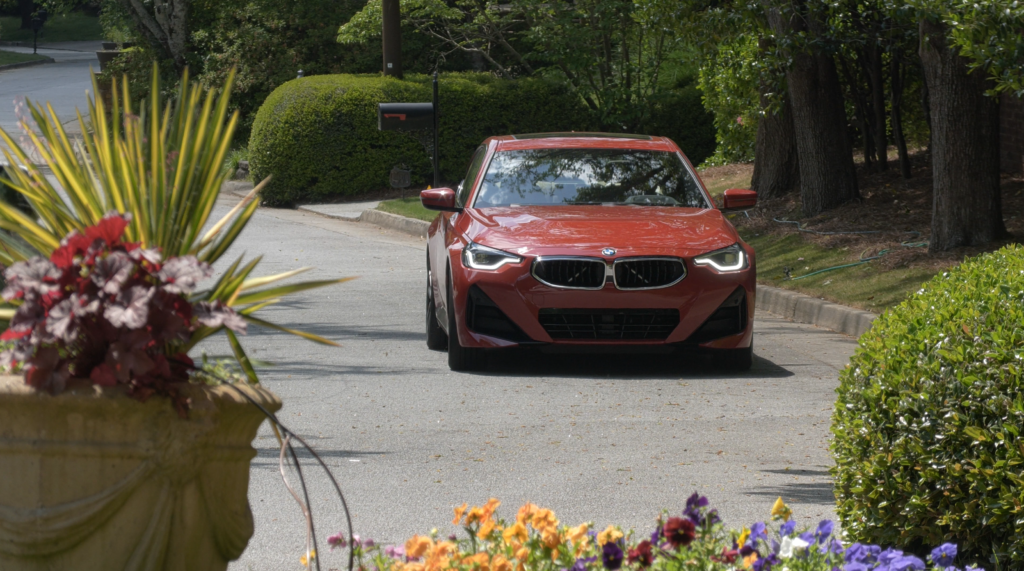 The ride quality is impressively tuned thanks to the M Sport suspension this particular model has. It doesn’t have any adaptive dampening, but I don’t necessarily think it needs it. The ride is sporty but smooth, gliding over the pavement without serving any unnecessary harshness over bumps that I’m used to in Atlanta. I actually believe this is one of the crowning achievements of this car. The MacPherson front suspension is perfect for the agenda of a 230i, while the independent multi-link rear suspension does a really good job of keeping everything out back in check. I averaged only 27 miles per gallon combined in my week of driving the 230i. Remember, it’s a 3,500 pound two-door with a four-cylinder engine, so there’s only so much you can do there. At the end of the day, I was unable to hit the EPA ratings.

Bottom line, if you don’t need four doors or a ton of cargo space, the 230i will provide a very comfortable package for you. It’s sporty but  easy to drive. It’s not blazingly fast, but will impress 99% of its target market. If you want more all-out performance, they have an M240i xDrive for you. I think this is still a well balanced package and an excellent value for most people, though I really wish the convertible would make its triumphant return.

In BMW’s usual fashion, you kick off the configuration of your 2 Series by selecting an Appearance Pack. For 230i, there are two: Sport Line and M Sport. The former is considered the base model and starts at $36,350. It gives you features like built-in navigation, wireless Apple CarPlay/Android Auto, active driving assistant, active blind spot detection, and lane departure warning. If you want your 230i to look more like an M240i, you’ll need to select the M Sport pack for $3,250 more. With it comes the front-end design of the M240i with its Shadowline exterior trim, frontal collision warning with city collision mitigation, active blind spot detection, the M steering wheel with variable ratios, and the M sport suspension. Add the Premium 2 Package and the Dynamic Handling Package, and you’re looking at my Melbourne Red test car – $44,000.

The 230i is a pretty back-to-basics BMW experience in a package that forgoes the brand’s divisive new styling. If you don’t need four doors, AWD, or loads of cargo space, and the M240i has too much power for you, then this is an excellent value in a shrinking segment that I really enjoyed driving.