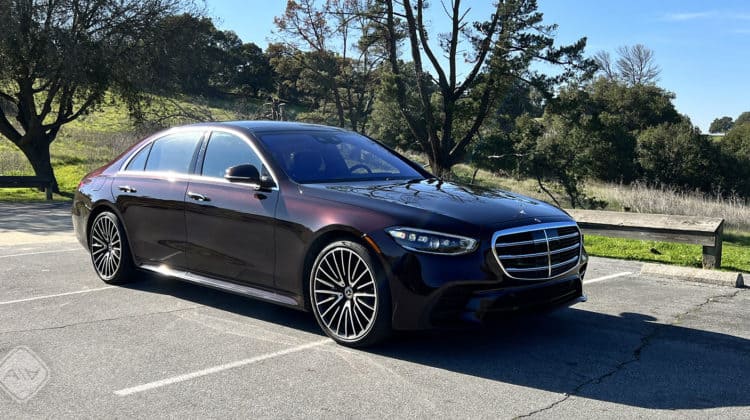 The Mercedes-Benz S-Class has long been the showcase for the brand’s upcoming tech, and the new-for-2021 S is no different. That’s why I decided to get my hands on the 2022 S 580 4MATIC for a week. I don’t normally seek out ultra-luxury vehicles because, quite frankly, they don’t tend to sell well. With other car companies, the gadgets, gizmos, tech and styling introduced on their flagships don’t always end up trickling down to less expensive models, but that’s exactly what happens at Mercedes-Benz. The new S-Class indicates the styling direction of the lineup and represents (along with the EQS) where Mercedes is headed.

It’s likely that the casual observer wouldn’t be able to tell the new S from the old S, and that’s how Mercedes sedan shoppers tend to like it. The grille on the front is a little rounder, the body lines a little more elegant, the rear end a bit more aerodynamic, but the design is far from a revolution in the way the new EQS is.

Speaking of the EQS, don’t confuse it for an “electric S-Class.” Think of it more as the EV alternative to the S 500 and S 580, rather than a replacement. Structurally, the two vehicles share nothing with one-another and the S-Class’ body is longer by just a hair. 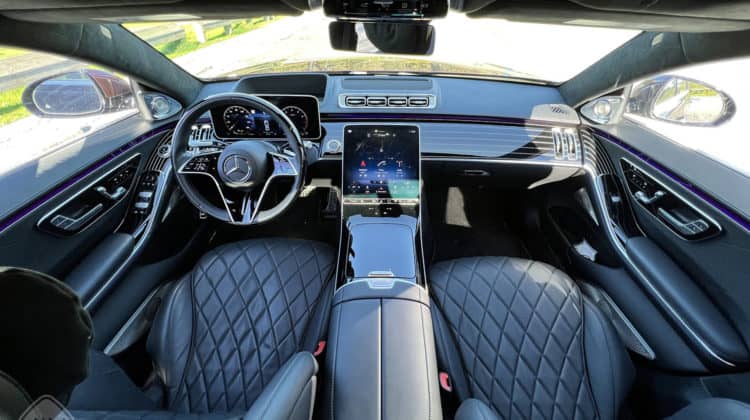 Hop inside the new S-Class and the first thing you’ll notice is that Mercedes doesn’t offer the massive ‘Hyperscreen’ that is available in the EQS 580. The base EQS 450+ gets a similar setup to the S-Class but look closer and you’ll see that the design difference is more than just screen-deep. The S drips with more palpable wood, subtly improved materials, and a more traditional aesthetic, albeit one with a modern twist. The instrument cluster lacks a sun-blocking binnacle, and the infotainment system is perched on the dash like a tablet computer in a holder. Thanks to the new OLED tech, however, neither display washes out or suffers from glare in the sunlight.

As you would expect from our tester’s $143,000 price tag, the front seats are among the best that money can buy. Both front seats in our tester featured heating, ventilation, massage, and more ways of motion than a carnival ride. My only mild complaint? Why do all massaging seats turn off after 10 minutes? Never once have I been 10 minutes into a massage and thought to myself “OK, that’s been lovely but it’s time to just sit in a chair now.” 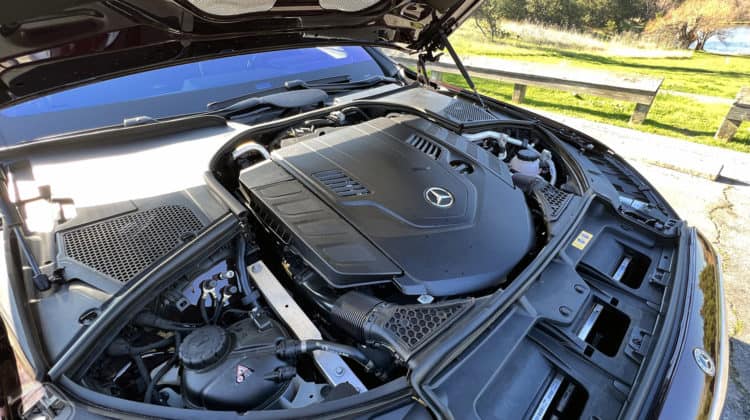 Although other engines will be available in the S-Class around the world, the non-Maybach S will have just two options in the USA. The S500 gets Mercedes’ latest 3.0 liter inline six cylinder engine. Thanks to an exhaust driven turbocharger, a 48V electric supercharger, and a mild-hybrid system, the base engine cranks out 429 horsepower and 329 lb-ft of twist. Dubbed “EQ Boost,” the Mercedes system is a little different from the average mild-hybrid thanks to the addition of an electric air conditioning compressor.

Most mild hybrids offer mild regenerative braking and a touch of boost but yield minimal real-world fuel economy improvements in the summer because the engine has to run in order to keep the cabin cool. Mercedes’ solution to this common drawback with mild hybrid and start/stop systems is two-fold: use a bigger motor and electrify the air conditioning. The motor found in the S 500 and S 580 is a 21 horsepower pancake motor that produces 184 lb-ft of peak torque. This motor helps get the S-Class off the line more rapidly when the engine has stopped and can fill in torque when needed. 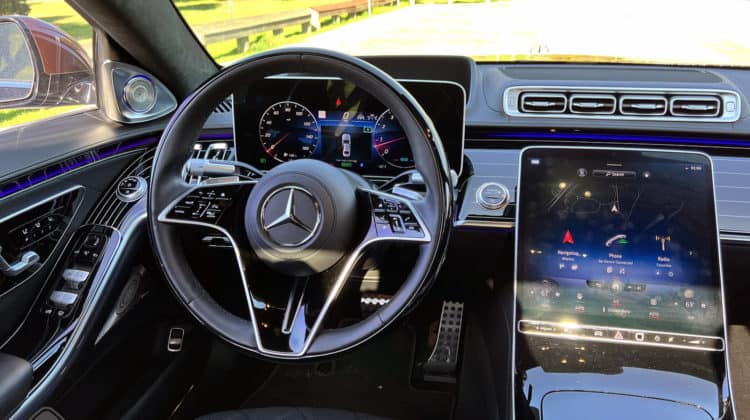 If you’re looking for a 3.9-4.0 second run to 60, you’ll want the S 580 with its 4.0-liter twin-turbo V8. It bumps power to 496 horsepower and 516 lb-ft of torque. Both engines use essentially the same mild hybrid motor, the same 9-speed automatic transmission, and the same 4MATIC all-wheel-drive system. At the moment, the decadent Mercedes-Maybach S-Class is only offered in S 580 guise.

According to the EPA, the 3.0-liter engine should be the most efficient at 24 MPG combined while the V8 drops that to 20 MPG. However, our S 580 surprised us with a week-long 23.6 MPG average!

Want even more power? Fear not, as the imminent Mercedes-AMG S63 S E Performance is predicted to combine a 4.0-liter V8 with a plug-in hybrid system to make around 700 horsepower. For more details on that powertrain, check out the new AMG GT 63 S E Performance 4-door Coupe. If you prefer something more traditional, a Mercedes-Maybach S 680 is also on the horizon with a 621 horsepower V12. It sure is good to be king. 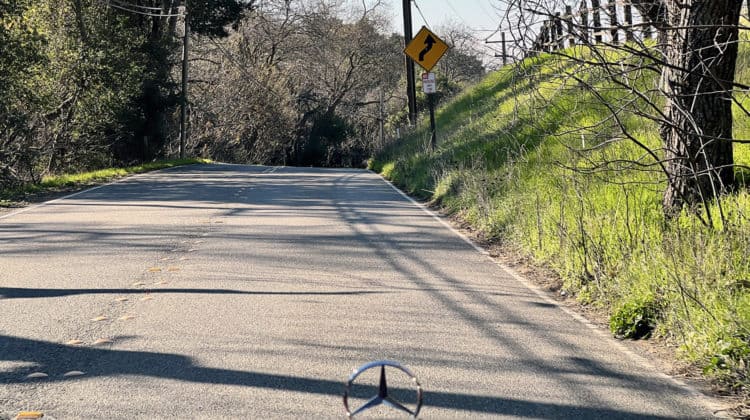 With a curb weight of 4,775 pounds, the S 580 is 278 pounds heavier than a V8-equipped E-Class, but the S is tuned completely different. S-Class shoppers are looking for a vehicle that floats down the road regardless of the surface. Expansion joints? No problem. Speed bumps? What speed bumps? This is the kind of sedan that says “hey, why are you in a hurry” when you start to push things a little harder in the corners. Even when the suspension is set to the firmest and most dynamic mode, the S 580 is more of a highway cruiser than a corner carver. That’s not to say it doesn’t handle well, far from it. If you keep pushing the car harder and harder, you’ll find that the adaptive suspension hunkers down and bends the laws of physics at your will, but at the end of the day this big sedan feels more at home Driving Miss Daisy. The upcoming aforementioned AMG model should prove to be the super-sized performance sedan for those who require a more dynamic isolation chamber. 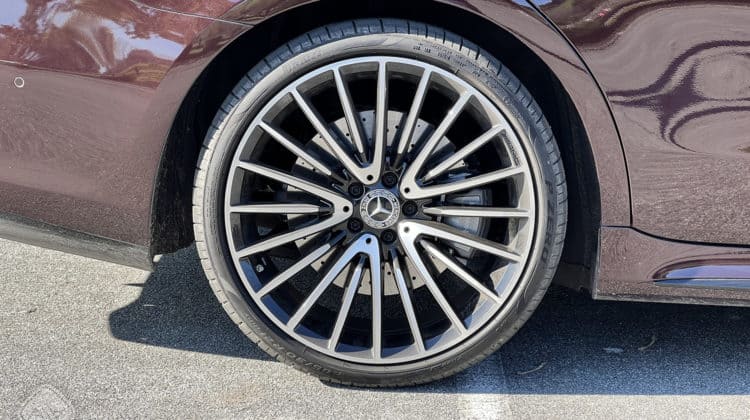 When it comes to the numbers, the S 580 4MATIC we tested ran from 0-60 in a swift 3.97 seconds (which we rounded up to 4.0) and, thanks to massive brakes and grippy tires, took just 107 feet to return to a stop. Now about that rubber. The rear tires on this model were 285/30R21. No, that’s not a typo, that’s a 30-series tire on a full-size luxury yacht. Up front the tires were a somewhat more reasonable 255/35R21, but any way you slice it, this Benz was wearing some pretty thin shoes and that explains a few things. First, it explains the grip and poise when pushed harder than you think you should be pushing a nearly 5,000-pound luxury sedan. Next and most regrettably, it explains the awkward and painful sounds you experience when encountering a pothole or slightly tall driveway entrance. Take my advice, just stick with the base 19” wheels. I don’t want to know how often the average owner will end up with a bent rim or worse, running around daily on 21s…. without a spare tire. 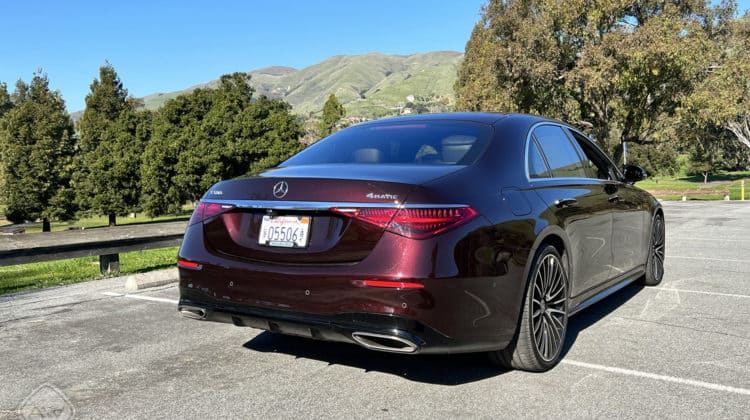 I’m certain that folks shopping for a BMW 7-Series, Audi A8, Lexus LS and Genesis G90 would tell you they cross-shopped the S-Class, but I’m not sure the cross-shopping occurs in the other direction. Why? Because the S-Class is almost in a price category of its own. The base S 500 starts around $24,000 more than a BMW 740i and a whopping $35,100 more than the Lexus. Prefer percentages? The Mercedes is nearly 50% more expensive than the Lexus flagship and if you get carried away with the “base” Maybach model, it’ll be well into Bentley territory and a solid price competitor to some of the Rolls-Royce options.

Our S 580 model started at $117,700 and was only lightly equipped at $143,240. Notable options missing on this luxury cruiser were the Executive line package, which upgrades the rear cabin for $12,000, and the $6,500 E-Active Body Control suspension that takes ride comfort, safety and handling ability to the next level. That said, there were some eye-watering options on our spendy plum-colored S. These included a $6,730 “4D” audio system sporting 31 speakers, 1,750 watts of amplifier power, and 8 “exciters” that literally shake the seats. The ultra-cool 3D instrument cluster was $3,000, the rear axle steering a fairly reasonable $1,300, and the AMG appearance pack was $4,300. Again, I would avoid the 21″ wheels and their $1,950 price tag. Paint, leather, and other miscellaneous options account for the rest of the $26,000 surplus. 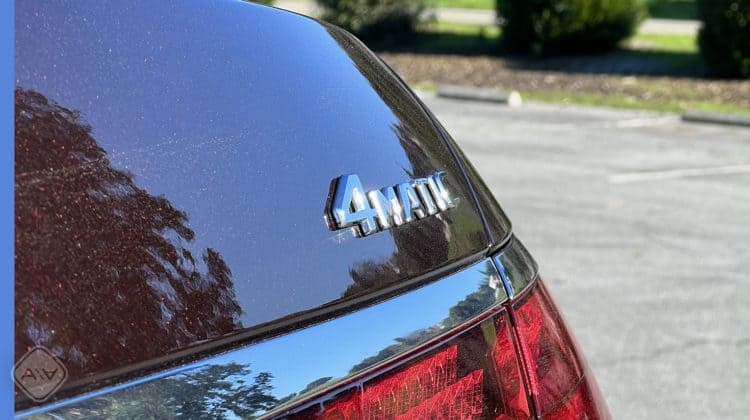 Would I buy the S-Class? No. But the reason isn’t because I don’t have a trust fund, although that lack of cash would be a serious impediment to ever owning one… It’s that the EQS exists. And I don’t have a personal driver. Being the kind of guy that prefers to drive rather than be driven, the EQS is where my cash would go, should I ever find $140,000 hanging out under my sofa. The EQS may not be as spacious in the back seat, and the exterior styling might look like a cab-forward Chrysler concept from 1999, but it’s also the S-Class for the 21st century. It’s just about as luxurious, with easily triple the “gadget bling” thanks to the 56-inches of OLED display and touchscreen and a practical hatchback cargo area as well. If your family and friends are into gadgets, nothing says success better than rolling up in a car with more OLED real-estate than their living room. Oh, and it’s somehow a hair less expensive. Go figure.