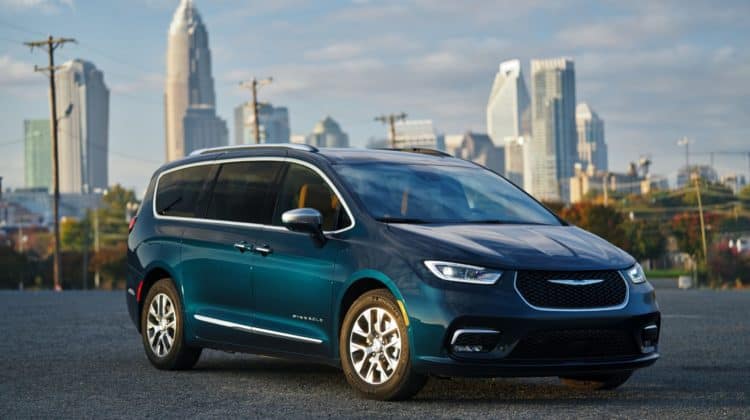 Although there are four key entries in the minivan segment, there are others that aren’t as prominent. The Chrysler Voyager, for instance, is the least expensive one you can buy at just under $28,000 but there’s a caveat. It’s essentially a pre-refresh Pacifica that isn’t available with all the features you can get on its sibling. You can also get vehicles like the Ford Transit and Mercedes-Benz Metris but those were built as commercial vehicles first and don’t have the refinement of entries like Honda Odyssey, Kia Carnival, Chrysler Pacifica, and Toyota Sienna.

The Chrysler Pacifica Hybrid has the highest starting price among minivans but it’s eligible for the full $7,500 federal tax credit because of its large battery along with other incentives. Key features like forward collision warning, automatic emergency braking, parking sensors, and adaptive cruise control are also not available on all trims. Some vehicles only get a handful across the board and require you to go higher up the trim ladder to get the other tech features. The only entry that gets everything standard even on the base model is the Pacifica. Kia requires you to up to higher trims to get adaptive cruise control while Toyota doesn’t give you the full suite until you get to a mid-grade model that costs around $39,000. Honda, on the other hand, gives you most of the goodies in the mid-level models but requires you to go to the second highest one for parking sensors.

f you’re looking for upholstery that’s easy to clean, the Voyager is out of the running because the consumer version isn’t available with leather or leatherette. The Pacifica gets you leather if you pay at least $39,120 while the Odyssey switches to real cowhide at $38,760. Kia and Toyota reserve leather upholstery only on the higher trims; most mid-level models of the Sienna and Carnival get leatherette. Every minivan on sale except for the Honda Odyssey gets standard Apple CarPlay and Android Auto on every model. You have to go up to at least the EX or EX-L grade to get smartphone integration in the Odyssey.

Those looking for the most deals should take a look at the Chrysler Pacifica and the mechanically-related Voyager because there’s always some kind of offer for them. The best part is that the Pacifica has many variations including the luxurious Pinnacle model and the miserly plug-in hybrid variant. It’s also the most comfortable, meaning your passengers will be pampered on long drives. If you’re looking at Pacifica Hybrid, make sure to ask a tax professional to see if you qualify for the full $7,500 federal tax credit.

The Honda Odyssey may be one of the oldest entries but it has one of the smoothest transmissions and is the only one available with eight seats in the most expensive version. Honda’s sliding second row adds flexibility but also prevents you from getting a flat floor and awkwardly fits on the module. The fact that Apple CarPlay and Android Auto are optional and that you don’t get parking sensors and blind-spot monitoring until you go to the most expensive versions hurts the Odyssey’s overall value proposition.

Kia’s latest minivan, the Carnival has the largest cargo area, the longest warranty, and looks more like a crossover. It’s also the most luxurious thanks to those awesome second-row lounge chairs. However, that comes at the cost of practicality because the Carnival doesn’t have as many useful storage cubbies and its eight-seat configuration is only on lower trims. Some of the key features you want are also only on the range-topping model.

Those looking for the most efficient minivan without a plug should take a look at the Toyota Sienna. It’s packed with lots of clever storage cubbies plus seating for up to eight, and an optional e-AWD system. The tradeoffs? Slow acceleration. The Sienna is the slowest minivan currently on sale because it’s heavy and has the lowest power in its segment. Its cargo area is also on the smaller side and eight-seat configurations are only available on lower trims. Additionally, you have to trade four-season traction with ottomans because you can only have one or the other, not both.

Between the minivans currently on sale, the three that stand out are the Toyota Sienna, Kia Carnival, and the Chrysler Pacifica Hybrid. Each one has a specific consumer in mind and nails their mission briefs effortlessly.